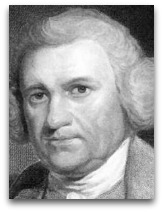 Overview
Smeaton, as a boy, made a fire engine or heat engine of some kind; supposedly in the manner or style of a Newcomen engine.

In c.1765, Smeaton equated one horsepower to 5 men or to 22,916 pounds of water raised one foot high in one minute against the force of gravity. [2]

Quotes | On
The following are quotes on Smeaton:

“Smeaton was the first to call himself a ‘civil’, as distinguished from a ‘military’, engineer.”

“Smeaton built a number of Newcomen engines at the Carron ironworks in Scotland and greatly increased their mechanical efficiency by more precise cylinder boring, a better proportioning of parts, and general improvement in shopwork. He attained, it is said, the highest performance of which this type of engine was capable in practice. One of his largest engines went to Russia in 1775 to pump out Catherine II's dry docks at Kronstadt. It replaced two enormous windmills, 100 feet high, which Dutch engineers had installed in 1719. It was said that these mills had required a year for the task; the Newcomen engine built by Smeaton did the job in about two weeks.”

Further reading
● Stewart, R.J. (2017). “John Smeaton and the Fire Engine: 1765-1785” (abs), Proceedings of the 1st International Conference Early Engines Conference - Part 1, in: Issue 2: The International Journal for the History of Engineering and Technology, 87.