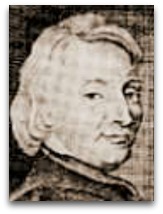 In existographies, John Toland (1670-1722) (IQ:180|#160) (FA:62) (CR:24) was an Irish-born British rationalist, philosopher, religio-mythology scholar, self-proclaimed atheist, first to be called a "free thinker", coined by William Molyneux (1697) in reference to him (in letter to John Locke), coiner of the term "pantheist" (1704), as one who sees the universe and god to be one (in letter to Gottried Leibniz), labeled a "modern Lucian" in obituaries, noted for []

Overview
In 1696, Toland published Christianity Not Mysterious, wherein the Bible was read in a new critical mode, which included the most doubting aspects of John Locke's philosophy; the publication was said to have started the "deist controversy"; the book was burned in Ireland in 1697. [1]

In 1698, Toland published an existography (biography) of John Milton, which caused a scandal per reason that a passage (Ѻ) in it was believed to question the authenticity of the New Testament.

In 1704, Toland, in Letters to Serena, addressed the following six topics: [7]

I. The Origin and Force of Prejudices.
II. The History of the Soul's Immortality Among the Heathens.
III. The Origin of Idolatry, and Reasons of Heathenism.
IV. A Letter to a Gentleman in Holland, Showing Spinoza's System of Philosophy to be Without Any Principle Or Foundation.
V. Motions Essential to Matter; in Answer to Some Remarks by a Noble Friend on the Confutation of Spinoza. To All which is Prefix'd,
VI. A Preface; Being a Letter to a Gentleman in London, Sent Together with the Foregoing Dissertations, and Declaring the Several Occasions of Writing Them

Toland, here, claimed that rest, or absence of motion, is not merely relative; that rest is a special case of motion, according to which when there is a conflict of forces, the body that is apparently at rest is influenced by as much activity and passivity as it would be if it were moving.
In 1713, Toland published an English translation of Giordano Bruno’s Expulsion of the Triumphant Beast (1584), which espoused the belief that moral and political regeneration will only be achieved though the expulsion of the beast of superstition and began to circulate it around England and the continent. [9]
Pantheism
In 1705, Toland, in his Socinianism Truly Stated, defined himself as a pantheist, a term that he used to describe the god equals nature views of Benedict Spinoza.

“Pantheism is the belief in no other eternal being but the universe.”

In 1720, Toland, in his Pantheisticon, outlined an entire new religion based on pantheism, replete with rituals, secular liturgy, meetings, etc. [4]

Influences
Toland was influenced by Giordano Bruno, e.g. he purchased Queen Elizabeth's bound copy of the four dialogues of Bruno, and Lucretius, e.g. his On the Nature of Things was near him in the room where he dereacted (died). He was friends with Anthony Collins. [4]

Influenced
Toland, via his "Letters to Serena", influenced Baron d'Holbach's ideas about physical motion, specifically his idea that apparent rest is an illusion, and that all things are in motion, to some degree. [6]

Quotes | Employed
The following are quotes employed by Toland:

“We need not desire a better evidence that any man is in the wrong, than to hear him declare against reason, and thereby to acknowledge that reason is against him.”

Quotes | On
The following are quotes on Toland:

“Toland is the great oracle of anti-Christians.”

“Toland is the Lucian of our times.”

“This truth—that every thing in the universe is in motion; the essence of matter is to act: if we consider its parts attentively, we shall discover that not a particle enjoys absolute repose; those which appear to us to be without motion, are, in fact, only in relative or apparent rest; they experience such an imperceptible motion, and expose it so little on their surfaces, that we cannot perceive the changes they undergo—which is still denied by many metaphysicians, has been conclusively established by the celebrated Toland, in a work which appeared in the beginning of the eighteenth century, entitled Letters to Serena. Those who can procure this scarce work will do well to refer to it, and their doubts on the subject, if they have any, will be removed.”

“Toland is best known for his call for common-sense thinking in the deist manifesto Christianity Not Mysterious, he gained notoriety as editor and biographer of Milton, Harrington, and Ludlow; translator and publicist of Giordano Bruno; pamphleteer and spy for Robert Harley, and purveyor of Hermetic and clandestine manuscripts for Prince Eugène of Savoy. A self-proclaimed atheist, he amused, annoyed, and embarrassed such personal acquaintances as Locke, Swift, Bayle, Leibniz, Shaftesbury, and Sophie Charlotte of Prussia. His works on biblical criticism, philosophical materialism, and the Druids became sources for Diderot and Holbach; and historians of Freemasonry and of English political and diplomatic affairs continue to search for keys to the intrigue that surrounded him.”

“Even on his deathbed, Toland appeared more interested in books than his own health, after all it was books and ideas that had dominated his life. Crammed into his back room, books were his most precious belongings. Stacked on chairs, teetering in piles on chests, or packed into boxes, these works, and his intimacy with their contents, were the foundation of Toland's reputation. A mixture of recondite theology, classical learning and political tracts, the eclecticism of his library underscores the range of his interests and erudition. Even the last letters he wrote, which as well as describing in harrowing detail his sickness, also included remarks about books. He would lend Lady 'H' a copy of the fine romance Zayde so that she could be freed from the drudgery of the 'longwinded and unwieldy Cleopatra'. To Molesworth, he wrote of Cicero's De Republica and a projected volume on the 'history of the late Wars from King William's death to Queen Anne's peace'.”

Quotes | By
The following are noted Toland quotes:

“I believe all men will readily allow, that none should speak with more freedom and assurance than he that defends or illustrates the truth.”

“[Toland] was an assertor of liberty, a lover of all sorts of learning, but no man’s follower or dependent. Fowns or fortune bend him to decline from the ways he had chosen.”