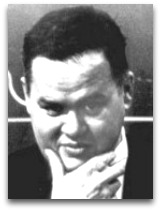 In existographies, John Tukey (1915-2000) (IQ:180|#157) (CR:20) was an American chemist, mathematician, and statistician noted for his 1966 chemical thermodynamics framed model of attitude change, based on the theory of absolute reaction rates in chemistry.

Overview
In 1966, Tukey, via personal communication to American chemical engineer turned sociologist James Coleman, explained his so-called "free energy" model of personal "attitude" state change; the gist of which, or at least what is known about this unpublished Tukey free energy theory, was summarized by Coleman (1971) as follows: [1]

“Another approach that is suggestive in this direction is one proposed recently by John Tukey (1966) for models of attitude change, based on the theory of absolute reaction rates in chemistry. Each state of a chemical entity is characterized by a ‘free energy level’, and each boundary between states by a free energy level that is higher than the levels of the states it separates.

The transition rate from each state to the other is an exponential function of the difference between the free energy level of the state and that of the boundary. Tukey's proposal is that an attitudinal state may be characterized by a tension level, and the boundary between states by a higher tension level, with the transition rates an exponential function of the difference between tension levels.

This conception has the virtue that in any system with three or more intercommunicating states, it can be tested, because the number of transition rates is greater than the number of tension levels. In such a system, of course, the individual in effect ‘seeks out’ that state that has the lowest tension level, although the expected time to arrival depends upon the tension level of the boundaries that separate it from other states.

In a system with three states: 1, 2 and 3, there are six transition rates qij, two between each pair of states. Tukey's proposal would define three tension levels, s1, s2, and s3, for the three states, and three for the boundaries between states, s12, S13, and s23. The transition rate qij is a function of the difference in tension levels between state i and boundary ij.

That is, qij is a function of sij – si, in particular, qij = exp (sij – si). This formulation, analogous to that of absolute reaction rates in chemistry, allows estimation of the values of sij and si, from the values of qij for all i and j. Further, since the zero point of the tension levels does not affect these differences, one tension level can arbitrarily be set equal to zero with no loss of generality. Thus, in a three-state system, there are only five tension levels to estimate, and six empirically-obtained qij's. This allows testing of the underlying model that Tukey proposed. When the number of states is greater than three, the test can be made stronger, since the number of transition rates is n(n— 1), while the number of tension levels is ½n(n—1)+n-1.”

Tukey, in short, seems to have conceptualized the logic that people are "chemical entities" who have "attitude states", states of which, as in chemistry, operates such that each state is characterized by a ‘free energy level', and each boundary between states by a free energy level that is higher than the levels of the states it separates. [1]

Other
Tukey, while working with John Neumann (also a free energy theorist) on early computer designs, was the person who coined the term “bit”, a contraction of “binary digit”, a usage later adopted and made popular by Claude Shannon in 1948.

Education
Tukey was a child prodigy who taught himself to read by age three; the anecdote of which is summarized by David Brillinger (2002) as follows: [2]

“Tukey was a prodigy. His parents had not realized that he had learned to read until on a driving trip there was concern over whether a particular bridge over the Susquehanna was closed. Aged 3 years, he spoke up to say that the bridge was closed. He had read a legal notice in the newspaper announcing the closure.”

He completed his BS (1936) and MS (1937) in chemistry at Brown University and MA and PhD in mathematics at Princeton. Tukey worked at Bell Labs, where he was known as a “genius with tremendous drive” who was said to known "a lot" because he “worked hard at knowledge for many years” (Richard Hamming, 1986) (Ѻ)(Ѻ) He retired from Bell Telephone Laboratories and from teaching at Princeton in 1985. [2]

Religion
Little key term can be found information on Tukey, in respect to god, atheism, Christianity, religion; Other than the fact that he co-authored at least two papers (Ѻ)(Ѻ) in 1966 on pollution in the Christian Science Monitor. Tukey would seem to be secular, by overt classification means.