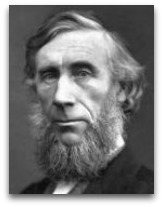 In existographies, John Tyndall (1820-1893) (IQ:170|#414) (FA:138) (CR:68) was an Irish physicist notable for having done the first English translations of the works of Clausius and Helmholtz, in the early 1850s, for having seeded the Spencerian dilemma (1858), and for having launched the 1874 Tyndall-Stewart-Tait debate, on the relation between modern hard science and religion, wherein one of the first dead atom theory ridicules resulted.

Translations
In 1850, Tyndall did the first German-to-English translations for the thermodynamics papers of German physicists Rudolf Clausius and Hermann Helmholtz and in 1867 penned the introduction to the 1867 edition of Clausius' textbook The Mechanical Theory of Heat. [1] Tyndall was associated with English mathematician Thomas Hirst, English translator of the first edition, whom he had worked with in 1845 while an engineer Halifax.

Spencer, equilibration, and the second law

In c.1858, Tyndall informed English philosopher-scientist Herbert Spencer that his theory of the existence of a type of “moving equilibrium” between society and the environment, moving society towards a state of ultimate bliss, the utmost state correlative with a point at which equilibration ceased, was incorrect in view of the second law of thermodynamics. By this, Spencer was thus “staggered” when told by Tyndall that ultimate equilibrium was system death (according to the second law), otherwise known as heat death. [2] In a letter to Tyndall, Spencer declares: [3]

“Regarding, as I had done, equilibration as the ultimate and highest state of society, I had assumed it to be not only the ultimate but also the highest state of the universe … and your assertion that when equilibrium was reached life must cease, staggered me. Indeed, not seeing my way out of the conclusion, I remember being out of spirits for some days afterwards.”

The issue of what then happens to a society after equilibration is reached stayed on Spencer’s mind for the next forty years. In his 1899 autobiographical “The Filliation of Ideas”, Spencer concludes that when equilibration is completed, “dissolution” occurs. [2]

Tyndall was responsible for launching the 1874 four-year debate that erupted at a Belfast, Ireland, meeting of the British Association for the Advancement of Science (BAAS) on whether or not modern science will replace religion or whether the two will forever remain separate, which involved a number of the greatest scientists of the 20th century such as James Maxwell, and a number of the founders of thermodynamics, such as Peter Tait and William Thomson. The debate erupted when the newly appointed BAAS president John Tyndall announced boldly that “all religious theories, schemes and systems must submit to the control of science, and relinquish all thought of controlling it.” In the four years to follow resulted in a number of articles published in Nature, one book, exchanges of post cards, and one last dying poem by Maxwell all centered around the nature of thermodynamics, death, morality, and the theories of immortality.

Tyndall, in his 1874 Belfast Address, supposedly, stated that thermodynamics and Darwin’s theory of evolution were the two great scientific doctrines of his time, and stated that the latter was of “still wider grasp and more radical significance” than the former. [5]

Atheism
Following the infamous lecture both he and, it seems, Thomas Huxley, were charged with being “material atheists” (see: atheism) and for “ignoring the existence of god and advocating pure and simple materialism”. [6]

“Christian men are proved by their writings to have their hours of weakness and of doubt, as well as their hours of strength and of conviction; and men like myself share, in their own way, these variations of mood and tense. Were the religious views of many of my assailants the only alternative ones, I do not know how strong the claims of the doctrine of 'material atheism' upon my allegiance might be. Probably they would be very strong. But, as it is, I have noticed during years of self-observation that it is not in hours of clearness and vigor that this doctrine commends itself to my mind: that in the presence of stronger and healthier thought it ever dissolves and disappears, as offering no solution to the mystery in which we dwell, and of which we form a part.”

“God is nowhere treated worse than by the natural scientists who believe in him. Newton still allowed him the 'first impulse,' but forbade him any further interference in his solar system. Secchi [c.1872] (Ѻ) only allows him a creative act as regards the primordial nebula. Finally, Tyndall totally forbids him any entry into nature and relegates him to the world of emotional processes. What a distance to the old god — the creator of heaven and earth, the maintainer of things — without whom not a hair can fall from the head.”

Quotes | By
The following is a noted quotes by Tyndall"

“In our day grand generalizations have been reached. The theory of the origin of species is but one of them. Another, of still wider grasp and more radical significance, is the doctrine of the conservation of energy, the ultimate philosophical issues of which are as yet but dimly seen—that doctrine which 'binds nature fast in fate' to an extent not hitherto recognized, exacting from every antecedent its equivalent consequent, from every consequent its equivalent antecedent, and bringing vital as well as physical phenomena under the dominion of that law of causal connection which, so far as the human understanding has yet pierced, asserts itself everywhere in nature.”