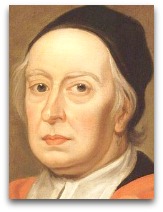 Hooke
In 1687, after Robert Hooke gave an account of his theory that ancient sea shell fossils could be explained by supposing that in the past the earth had been covered in a great flood, not one that lasted a year, but one that lasted much longer, which resulted from the axis of the earth shifting over time. In Feb 1687, Edmond Halley sent an account of Hooke’s hypothesis to Wallis, who criticized the theory per reason that it ignored or contradicted the Genesis account of things. [2]

Hobbes
At some point, Wallis beat Thomas Hobbes in a mathematical dispute. [2]

Quotes | On
The following are quotes on Wallis:

“Descartes took up almost without change what this anonymous mathematician of the thirteenth century had written; and henceforth, from Descartes to Wallis, from Wallis to Bernoulli, and from the former to Lagrange, then to Gibbs, the principle of virtual displacements continued to be extended.”

— Pierre Duhem (1913), “Research on the History of Physical Theories”, in: Essays in the History and Philosophy of Science (pg. 242)