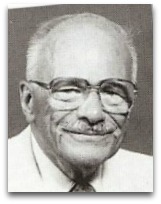 In human chemistry, John Winkelman (1911-c.2000) was an American German-languages scholar noted for []

Overview
In 1987, Winkelman, in his Goethe’s Elective Affinities: an Interpretation, digressed on Goethe's Elective Affinities, commenting a bit on the reaction theory, and on interpreters such as Christoph Wieland, Friedrich Gundolf, among others. [1]

Education
Winkelman completed his BA and MS from City College New York and his PhD in 1952 with a dissertation on “Social Criticism in the Early Works of Erich Kaestner” at the University of Michigan. From 1966 to 1970, he served as the department chairman of the German department. In 1987 he was professor emeritus of German literature.