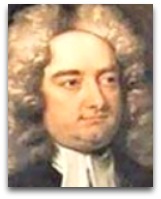 In existographies, Jonathan Swift (1667-1745) (IQ:180|#169) (Cattell 1000:64) [RGM:194|1,500+] (CR:17) was an Anglo-Irish satirical writer, religious commentator, and unlearn expositor, generally known for his Gulliver’s Travels (1726), noted for commentary on John Toland, who he called the "great oracle of the anti-Christians", and for his Cicero-like digression on whether the mind was formed by god or by the Epicurean fortuitous concourse of atoms origin of things.

Quotes | By
The following are quotes by Swift:

“The latter part of a wise man's life is taken up in curing the follies, prejudices, and false opinions he had contracted in the former.”

“When a true genius appears in this world, you may know him by this sign, that the dunces are all in confederacy against him.”

“We have just enough religion to make us hate, but not enough to make us love one another.”

“Unless a proposition ‘can be presently comprehended by the weakest noodle’, it is no part of religion.”

“Once and a while a true genius may happen to arise. Every age might perhaps produce one or two of these to adorn it, if they were not sunk under the censure and obloquy of plodding, servile, imitating pedants: I do not mean by a true genius any bold writer, who breaks through the rules of decency to distinguish himself by the singularity of his opinions: but one, who upon a deserving subject is able to open new scenes, and discover a vein of true and noble thinking, which never entered into any imagination before: every stroke of whose pen is worth all the paper blotted by hundreds of others in the compass of their lives.”

“Philosophers say, that man is a microcosm, or little world, resembling in miniature every part of the great; and, in my opinion, the body natural may be compared to the body politic; and if this be so how can the Epicurean's opinion be true, that the universe was formed by a fortuitous concourse of atoms; which I will no more believe, than that the accidental jumbling of the letters of the alphabet could fall by chance [see: typing monkeys] into a most ingenious and learned treatise of philosophy. Risum tincatis amici? [hor] This false opinion must needs create many more; it is like an error in the first concoction, which cannot be corrected in the second; the foundation is weak, and whatever superstructure you raise upon it, must of necessity fall to the ground. Thus men are led from one error to another, until with Ixion they embrace a cloud instead of Juno; or, like the dog in the fable, lose the substance in gaping at the shadow: For such opinions cannot cohere; but like the iron and clay in the toes of Nebuchadnezzar's image, must separate and break in pieces. I have read in a certain author, that Alexander wept, because he had no more worlds to conquer; which he needed not have done, if the fortuitous concourse of atoms could create one; but this is an opinion fitter for that many headed beast the vulgar to entertain, than for so wise a man as Epicurus; the corrupt part of his sect only borrowed his name, as the monkey did the cat's claw to draw the chestnut out of the fire.”