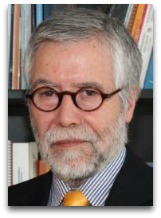 Overview
In 2012, Aguilera, in his chapter subsection “Molecular Sociology”, of his book Edible Structures: the Basic Science of What We Eat, wherein he touched on the subject of molecular sociology, as introduced by French supramolecular chemist Jean-Marie Lehn, and also of human chemistry in general, which Aguilera introduces as follows: [1]

Aguilera, in his six-page molecular sociology chapter subsection, gives six types of Empedocles-style human-to-chemicals comparisons, aphorism, or analogies, depending, ranging from: speculations on how a marriage is like a weaker type of covalent bond and or Van der Waals interaction force [see: Muller dispersion force], how uncharged molecules clustering together in a charged environment are like people discriminated against joining together, how enzymes can can break up and or catalyze the formation of bond between big molecules, like matchmakers, or about how there may be some type of "activity coefficient", similar to the water activity aw, which quantifies the layers of water moisture around dry foods, that may quantify the way in which people are attracted to "high energy surfaces" (see: surface chemistry), among other comparisons.

Education
Aguilera completed his BS in chemical engineering in 1971 at Pontificia Universidad Católica de Chile (PUC), his MS in 1973 at MIT and PhD in 1976 at Cornell University, both with specialization in food technology, and an MBA from Texas A&M University in 1983. He has been the Head of the Department of Chemical and Bioprocess Engineering at PUC, Associate Dean for Development and the Director of Research and Postgraduate Studies in the School of Engineering. Since 1986, he has been a visiting professor at the University of California at Davis, Cornell University, and Technical University Munich, a technical consultant for the FAO, and a scientific advisor for the Nestlé Research Center in Switzerland, for more than 12 years. In 2010 was first Chilean to become a foreign associate member of the U.S. National Academy of Engineering, for his contributions to the understanding of the role of food structures and their properties.