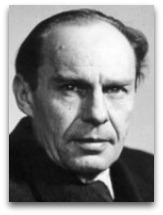 In human thermodynamics, Josef Ludvik Fischer (1894-1973) was a Czech philosopher and sociologist who at one point had worked hard to develop a fourth law of thermodynamics. [1]

Education
In 1935, Fischer was appointed associate professor of sociology and philosophy at Masaryk University in Brno. In the period 1939-1945, he was in exile in Holland. After his return, he actively participated in the recovery of Czech universities, was Dean of the Faculty of Philosophy in Brno from 1945 to 1946, Rector of Palacky University in Olomouc, 1946-1949, Rector 1949-1950. Co-founded and edited the magazine Index and Sociological Review. He has worked at leading domestic and foreign scientific societies, published a series of books, journals works of philosophy, sociology, political science, cultural theory, cultural politics and literature. [2] Fischer, notably, was mentor to Vaclav Havel in circa 1953.