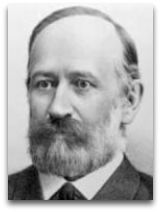 Boltzmann
At some point in the early 1860s, Stefan famously gave Boltzmann, then an undergraduate (or new graduate student) at the University of Vienna, copies of James Maxwell’s papers and an English grammar, and told him he would do well to study these ideas. [1] The paper he likely gave Boltzmann was Maxwell’s 1860 paper “On the Dynamical Theory of Gases”, showing how, through kinetic theory, to obtain physical properties of gases from the underlying distribution of velocities, which was thus an elaboration of Clausius’ 1857 theory, taking into account not simply the average speed of the atoms, but their distribution of speeds greater or smaller than the average. [2] Boltzmann later recalled that, at the time, he knew no English, but armed with Stefan’s grammar and a dictionary his father had given him, that he succeeded in familiarizing himself with Maxwell’s new theory.

In 1868, Boltzmann published a more convincing physical explanation for the formula Maxwell had derived, resulting in the now-famous Maxwell-Boltzmann distribrution. Boltzmann is said to have did this by analyzing what would happen to a volume of gas rising in the Earth’s gravitational field, meaning that pressure would decrease (or volume would increase) with height, according to which Boltzmann showed that Maxwell’s formula correctly predicted how the number of atoms or molecules with a particular energy would change. [1] Boltzmann followed this up with his 1872 derivation of his minimum theorem, later to be called an H-theorem, a function that quantified an approached to equilibrium at which point the Maxwell distribution of velocities would exist and that the negative value of this function, i.e. -H, was said to be a representative measure of the entropy of the gas.

Education
Stefan was born to illiterate Slovenian peasants, but quickly rose through the education ladders. Stefan studied mathematics and physics at the University of Vienna, graduating in 1857. He became a physics lecturer the following year, at the age of 23.

Vienna school
Stefan was the anchor point of the Vienna school of thermodynamics. He began running the physics department at the University of Vienna in 1862, becoming the director in 1866 remaining there until his death in 1893. Stefan gave Josef Loschmidt a junior level teaching position in 1868.