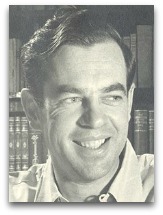 Overview
Campbell, in his The Hero with a Thousand Faces (1949), asserted the theory that a single myth stood behind the stories of Krishna, Buddha, Apollonius of Tyana, Jesus and other hero stories; in his The Masks of God: Occidental Mythology, Volume Three (1960), stated “it is clear that, whether accurate or not as to biographical detail, the moving legend of the crucified and risen Christ was fit to bring a new warmth, immediacy, and humanity, to the old motifs of the beloved Tammuz, Adonis, and Osiris cycles.” (Ѻ)

Quotes | On
The following are quotes on Campbell:

“History, Joseph Campbell argued, is completely silent (see: silent historians problem) on Jesus Christ. The only sources on Jesus are the Pauline Epistles and the Four Gospels of the New Testament. Having eliminated them as having no historical or evidential value, all that remained were alleged references to Jesus by Jewish and pagan writers, upon whom "religious apologists" rely to make their case for the historical Jesus. They are from the writings of the Jewish historian Josephus, and from the three Roman writers Tacitus, Pliny the Younger, and Suetonius. None, he argued, could withstand critical testing.”

Quotes | By
The following are quotes by Campbell:

“The cave you fear to enter holds the treasure you seek.”