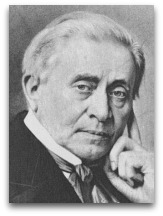 Quotes | On
The following are quotes on Henry:

“My own judgment, if of any value, would rank the [genius] ability of Henry—I do not say his achievements—a little below that of Faraday. Indeed, their lives and their manners of working were strangely alike. Each born in humble condition, without any of the adventitious aids of position or influence, was destined apparently to mechanical occupation. Faraday was an apprentice to a bookbinder. Henry served in the same capacity under a silversmith. Each started in life with moral and benevolent habits, well developed and healthy bodies, quick and accurate perceptions, calm judgment and self-reliance tempered with modesty and good manners, a good ground surely in which to plant the germs of the scientific life. Each by innate force of taste and intellect, was impelled to the pursuit of knowledge under obstacles which would have damped the ardor of ordinary youths. Each, endowed with a lively imagination, was in his younger days fond of romance and the drama; and, by a singular similarity of accidents, each had his attention turned to science by a book which chance threw in his way. This work in the case of Faraday was Mrs. Marcet's Conversations on Chemistry; and the book which influenced Henry's career was Gregory's Lectures on Experimental Philosophy, Astronomy, and Chemistry.”

Quotes | By
The following are quotes by Henry:

“Although the discoveries of Oersted, Arago, Faraday, and others, have placed the intimate connection of electricity and magnetism in a most striking point of view, and although the theory of Ampere has referred all the phenomena of both these departments of science to the same general laws, yet until lately one thing remained to be proved by experiment, in order more fully to establish their identity; namely the possibility of producing electrical effects from magnetism.”

— Joseph Henry (1832), “On the Production of Currents and Sparks of Electricity from Magnetism” [2]

“By ‘genius’ I would understand that power, or rather those powers of the mind which are capable of penetrating into all things within our reach and knowledge, and of distinguishing their essential differences. These are no other than invention and judgment: and they are both called by the collective name of genius, as they are of those gifts of nature which we bring with us into the world. Concerning each of which, many seem to have fallen into very great errors; for by invention, I believe, is generally understood a creative faculty, which would indeed prove most romance writers to have the highest pretensions to it; whereas by invention is meant no more (and so the word signifies) than discovery or finding out; or, to explain it at large, a quick and sagacious penetration into the true essence of all the objects of our contemplation. This, I think, can rarely exist without the concomitancy of judgment, for how we can be said to have discovered the true essence of two things, without discerning their difference, seems to me hard to conceive. Now this last is the undisputed province of judgment; and yet some few men of wit have agreed with all the dull fellows in the world, in representing these two to have been seldom or never the property of one and the same person.”