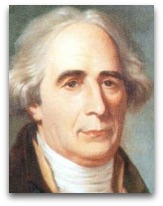 In existographies, Joseph Montgolfier (1740-1810) (IQ:#|#) was a French aeronautics engineer and paper manufacturer, noted for []

Overview
In 1760s, Montgolfier, in his early 20s, while observing laundry drying over a fire incidentally form pockets that billowed upwards, he began to contemplate the building of a hot air powered flying machine.

In 1775, Montgolfier built parachutes and did test jumps from his family house.

In 1782, Montgolfier, together with his brother Etienne Montgolfier, who originally was averse (Ѻ) to the idea, built a working hot air balloon.

On 4 Jun 1783, Montgolfier, and his brother, demonstrated an unmanned hot air balloon before the provincial Estates of Vivarais. News of this flight quickly reached Paris, where a commission from the Royal Academy of Sciences followed. (Ѻ)

Related
On 1 Dec 1783, Jacques Charles few a manned helium filled balloon. This, supposedly, launched a rivalry of sorts, as to which type of ballooning method was the best. (Ѻ)