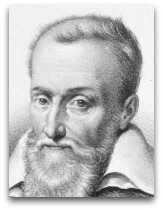 In existographies, Joseph Scaliger (1540-1609) (IQ:180|#209) (Cattell 1000:461) was a French religious leader, philosopher, and scholar; expanded the notion of classical history from Greek and ancient Roman history to include Persian, Babylonian, Jewish, and ancient Egyptian history.

Quotes | On
The following are quotes on Scaliger:

“As for the opinions of Epigenes, Bienewitz, Cardano, Scaliger, let these pass because they are not apposite to the subject and I do not have the at hand right now a copy of their work. As for whether storms are stirred by demons, as Paracelsus holds, this should be discussed at some length and a distinction should be made between the demons.”

“Christoph Rothmann who did not withdraw from entering into the so-called field of combat with Scaliger on the subject of comets, declared, in a certain letter to Tycho, that: ‘the lighter exhalations of the earth are carried on high with the help of good angels and are lifted above the moon, which the result that, being lighted by the penetrating rays of the sun there, they appear in the form of comets with tails or beards.”