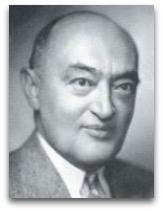 In existographies, Joseph Schumpeter (1883-1950) (GEcE:#) (CR:30) was an Austrian-born American economist and political scientist, part of the Harvard Pareto circle, noted for his effort to study what he called “scientific economics”, a version of economics that is equated with physics, and for his discussions on the rise and fall of people, which he viewed as human molecules, in social classes.

“It can be shown that in all cases, that human molecules rise and fall within the class into which they are born, in a manner which fits the hypothesis that they do so because of their relative aptitudes; and it can also be shown, second, that they rise and fall across the boundary lines of their class in the same manner. This rise and fall into higher and lower classes as a rule takes more than one generation. These molecules are therefore families [see: family molecule] rather than individuals. And this explains why observers who focus attention on individuals so frequently fail to find any relation between ability and class position.”

This rise and fall of human molecules in social structure theory, to note, is but a footnote, digressing on a theory that Schumpeter says he would like to elaborate on in the framework of a book, but this not at the moment being possibly, is something about which he refers readers to his 1927 “Theory of Social Classes in the Ethnic Homogenous Milieu” [3]

In this quote, Schumpeter seems to be digging around in a number of issues: one that human molecules are coupled to each other, especially in family lineages; to that a group of human molecules can also be termed or considered a new type of larger aggregate human molecule, e.g. such as the trihumanide molecule (three human molecules bonded in a unit); among other factors.

It is likely Schumpeter employed the “human molecule” view after coming across this logic in his studies of the Lausanne school, being that he penned articles on human molecular theorists such as Vilfredo Pareto and Leon Walrus.

Other
American physical economics historian Philip Mirowski describes Schumpeter’s History of Economic Analysis as a “breathtakingly audacious misrepresentation of both the history of economics and the history of physics”, supposedly for his discussion of James Joule’s version of the conservation of energy (or rather mechanical equivalent of heat) and Leonhard Euler’s development of the variational principles. [2]