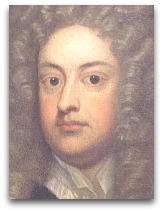 Overview
Addison was associated with Richard Steele and their magazine The Tatler.

Quotes | On
The following are quotes on Johnson:

Quotes | By
The following are quotes by Addison

“The whole chasm in nature, from a plant to a man, is filled up with diverse kinds of creatures, rising one over another by such a gentle and easy ascent, that the little transitions and deviations from one species to another, are almost insensible. This intermediate space is so well husbanded and managed, that there is scarce a degree of perception which does not appear in some part of the world of life.”