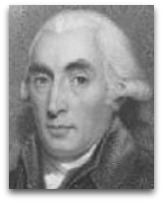 In existographies, Joseph Black (1728-1799) (IQ:180|#171) (Murray 4000:9|C) (Partington 50:13) (GCE:14) [CR:76] was a Scottish physicist and chemist notable for his scientific investigations into the nature of heat, for being a mentor and financier to Scottish mechanical engineer James Watt, and for his discovery of the phenomenon of “latent heat”, calculations of which were later used by French chemist Antoine Lavoisier and Pierre Laplace in their 1782 invention the “ice calorimeter”, which was used to determine the heat evolved in various chemical reactions.

Cullen
Black’s mentor was Scottish physician and chemist William Cullen, notable for being the first, in 1757, to make diagrams of affinity reactions in chemistry. Through this interaction, both Cullen and Black arrived at the view that heat may have a significant effect on affinities. [1]

Whiskey distilling
Black was said to have been led into his studies on the levels of heat stored in vapor in an investigative effort to find ways to reduce the local scotch whiskey distiller's rising fuel costs, amid rising shortages of wood.

Black measured how much energy [fuel?] it took to melt a pan of frozen water, and then how much more it took to boil water away. From these experiments, Black was able to show the distillers the minimum amount of wood they needed to burn in order to evaporate a given quantity of whiskey mash, and then how much cold water it would take to condense the whiskey out of the steam. [8]

This research, supposedly, is what gave James Watt the idea of inventing the separate condenser. [8]

Thus, by 1761, Black had deduced that the application of heat to ice does not cause its immediate liquefaction, but rather that for a period of time the ice absorbed the heat without a rise in temperature. [3] He designated this quantity of heat absorbed by the ice by the term “latent heat”. [4]

Publicly, Black never stated any definitive ideas about the ultimate nature of heat, but privately, he later came favor the material theory of heat, commending William Cleghorn (1751-c.1800) (Ѻ) and his 1779 idea of heat as subtle fluid composed of atomic particles, which repel one another, but are strongly attracted to the atoms of ordinary matter. [10]

In 1784, Black had adopted Antoine Lavoisier’s caloric theories and was teaching them. [2]

Publications
Black famously only published the following five works in his lifetime: his MD thesis (in Latin), De humore acido a cibis orto, et magnesia alba, 1754; "Experiments upon magnesia alba, quicklime, and some other alcaline substances" in Essays and Observations, Physical and Literary, 1756; a letter to the president of the Royal Society on the subject of the effect of having boiled water on its freezing point was published in Philosophical Transactions, 1775; a letter on the temperature of mercurial congelation in Philosophical Transactions, 1783; and a paper on the analysis of some hot springs in Iceland published in The Transactions of the Royal Society of Edinburgh, 1794.

He was much irritated by the appearance of a pirated version of his lectures on the subject of heat which appeared anonymously as An Enquiry into the General Effects of Heat, 1770, as well as by a number of letters written by Black published by their recipients in his lifetime.

Lectures
A 1786 book titled Lectures on Chemistry was published, a collection of both his and his student’s views of his lectures. [5] After his death his lectures were written out from his own notes, supplemented by those of some of his pupils, and published with a biographical preface by his friend and colleague, professor John Robison (1739-1805), in 1803, as Lectures on the Elements of Chemistry, delivered in the University of Edinburgh. [6] In his lectures on chemistry can be found one of the first statements of what is known as the zeroth law of thermodynamics, i.e. that heat tends to reach equilibrium among bodies.

Quotes | On
The following are quotes on Black:

“Joseph Black was the preeminent man of science in the Scottish enlightenment.”