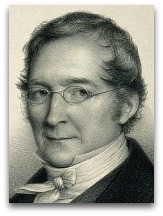 In existographies, Joseph Gay-Lussac (1778-1850) (Murray 4000:8|C) (CR:31) was a French chemist particularly noted for his 1802 formulation of the volume-temperature gas law relation, one of the forerunners to the ideal gas law. The publication for which he is known for seems to be the 1807 “First Attempt to Determine the Changes in Temperature which Gases Experience owing to changes of Density, and Considerations of their Capacity for Heat”. [4]

Gay-Lussac's law
In 1800, an eighteen-year-old Joseph Gay-Lussac, a recent graduate of the École Polytechnique, met and became a lab assistant and protégé of chemist Claude Berthollet. While working under Berthollet, Gay-Lussac discovered that gases expand by the same proportion for an equivalent rise in temperature. Gay-Lussac’s approach to chemistry was to express laws mathematically. [1] In 1802, referencing the previous work of French scientist Jacques Charles, Gay-Lussac published a paper on the precise relationship between the volume and temperature of a gas, which Gay-Lussac named "Charles law" in honor of Jacques Charles' original experiment. In modern terms, Charles’ law is defined as:

which states that for a body of gas at constant particle number n and pressure P the volume V of the gas will be constant K.

Gas constant: R
The first dominant use of R as a constant in the various gas laws seems to have been the use by French engineer Emile Clapyron's use in his 1834 Memoir on the Motive Power of Fire, wherein he states that Mariotte’s law (PV = k, at constant temperature) combined with that of Gay-Lussac’s law (P = kT, at constant volume) gives the expression: [2]

Education
On a friend’s recommendation, French chemist Claude Berthollet hired young Gay-Lussac to work as his assistant in his laboratory; upon his retirement, Gay-Lussac was appointed to his position at the Ecole Polytechnique, the founding school of thermodynamics. [3]

Students
In 1831, German chemist and physicist Heinrich Magnus, one of the main founders of the Berlin school of thermodynamics, studied under Gay-Lussac.