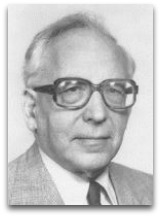 In thermodynamics, Joseph Kestin (1913-1993) was a Polish-born American mechanical engineer noted for his 1966 textbook A Course in Thermodynamics. [1]

Other
In ecological thermodynamics, from Kestin’s textbook, what has come to be known as the “unified principle of thermodynamics” states that: [3] “when an isolated system performs a process after the removal of a series of internal constraints, it will reach a unique state of equilibrium: this state of equilibrium is independent of the order in which the constraints are removed.” This statement is, supposedly, also attributed to the 1965 work of George Hatsopoulos and Joseph Keenan. [4] Kestin is also noted for completing the post-humorous English translation of German physicist Arnold Sommerfeld’s Thermodynamics and Statistical Mechanics. [5]

Education
Kestin completed his undergraduate work at the Technical University of Warsaw, Poland, in 1937. Soon thereafter he began graduate work at Kings College, London, but then in a late summer visit to Warsaw he was sent to a Russian prisoner-of-war camp and was not released to serve with the Allies until 1941. He completed his PhD, thesis “High Speed Flow of Gases through Channels”, at the Imperial College London in the mid 1940s. [6] He joined Brown University in 1952 as an engineering professor and was the director of Brown’s Center for Energies Studies up till 1984, after which he worked as a research professor. Kestin published over 250 research papers in thermodynamics and five books. [7]

“The subject [thermodynamics] cannot be fathomed in all its profundity in a single pass.”