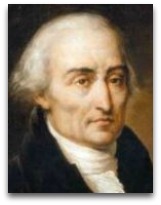 In existographies, Joseph Lagrange (1736-1813) (IQ:190|#25) (Cattell 1000:512) [RGM:558|1,500+] [GME:7] (DN:5-7) (CR:114) was an Italian mathematician noted for his 1788 Analytical Mechanics, in which, building on the work of physicist Isaac Newton, he employed a single function to express the different forces of a system, thus forming the differential equations of the system’s motion. [1] This work was extended in 1835 by Irish mathematical physicist William Hamilton, who gave the name “force-function” of the system, symbol U; logic that was later employed by German physicist Rudolf Clausius in his formulation of the energy of a body, otherwise known as “internal energy”, symbol U, in a modern sense.

“Analytical Mechanics presents a comprehensive account of Lagrangian mechanics. In this work, Lagrange used the principle of virtual work in conjunction with the Lagrangian multiplier to solve all problems of statics. For the treatment of dynamics, a third concept had to be added to the first two—d'Alembert's principle—in order to develop the Lagrangian equations of motion. Hence, Lagrange was able to unify the entire science of mechanics using only three concepts and algebraic operations.”

The greatest successor to English physicist Isaac Newton to extend the subject of dynamics, according to Hamilton, was Lagrange who, with his 1788 Analytical Mechanics (Mécanique Analytique), showed that most varied consequences respecting the motions of systems of bodies may be derived from one radical formula. Namely, using a method of generalized co-ordinates (Cartesian coordinates), Lagrange showed that if one determines a system’s configuration by a sufficient number of variables whose number is the same as that of the degrees of freedom possessed by the system, then the kinetic and potential energies of the system can be expressed in terms of those variables, and the differential equations of motion thence deduced by simple differentiation.

The work of Lagrange was later extended by Irish mathematical physicist William Hamilton with his two-part 1835 treatise “On a General Method in Dynamics”. [1]

Clausius | Gibbs
Hamilton’s derivation of what he called a “force function” was later referenced in German physicist Rudolf Clausius' 1879 The Mechanical Theory of Heat, the founding textbook of the newly emerging science of “thermo-dynamics”. [2] American engineer Willard Gibbs, in turn, extended the work of Clausius to found chemical thermodynamics, wherein, so to say, the so-called "Gibbsian" is the Lagrangian-Hamiltonian formulation for freely going or "freely-running", in Lewis-speak, isothermal isobaric earth-bound reacting systems.

“How comes it, then, that Laplace was an atheist? At the Institute neither he nor Monge, nor Berthollet, nor Lagrange believed in God. But they do not like to say so.”

Education
Lagrange was educated at the college of Turin, but it was not until he was seventeen that he showed any taste for mathematics. His interest in mathematics was said to have been first excited by a paper by English astronomer Edmund Halley, which he came across by accident. Alone and unaided he threw himself into mathematical studies; at the end of a year's incessant toil he was already an accomplished mathematician, and was made a lecturer in the artillery school.

In 1754, he began working on the problem of tautochrone, i.e. curves for which the time taken by an object sliding without friction in uniform gravity to its lowest point is independent of its starting point, discovering a method of maximizing and minimizing functionals in a way similar to finding extrema of functions. Lagrange wrote several letters to Swiss mathematician Leonhard Euler between 1754 and 1756 describing his results. He outlined his "δ-algorithm", leading to the Euler–Lagrange equations of variational calculus and considerably simplifying Euler's earlier analysis. Lagrange also applied his ideas to problems of classical mechanics, generalizing the results of Euler and French mathematician Pierre Maupertuis.

In 1794, Lagrange became the first professor of analysis at the École Polytechnique, the founding school of thermodynamics, upon its opening.

Students and influence
Lagrange was the advisor to French mathematical physicist Joseph Fourier.

Kinetic energy
In 1807, English physicist Thomas Young was credited as having first coined or used the term "energy" E in a modern sense, as:


Four years later, in partial correction to Young’s expression, Lagrange used calculus to show that a factor of two is involved in the relationship “potential” (potential energy) and “vis viva” (kinetic energy). [3] In the symbols used by Lagrange, i.e. T as kinetic energy, in his 1788 Analytical Mechanics:

where 2T denotes the whole "living force of the system". [1]

Social mechanics
In 1881, Irish mathematical economist Francis Edgeworth, in his Mathematical Psychics: an Essay on the Application of Mathematics to the Moral Sciences, attempted to platform an outline of a theory of social mechanics on the analytical mechanics of Lagrange, and in turn Hamilton, akin to a celestial mechanics formulation of societies, centered around the idea of calculations of utilitarian minimas and maximas . [4]

In the 1890s, Lagrange’s principle was employed by Polish economist Léon Winiarski in his formulation of “social mechanics”.

Quotes | On
The following are noted quotes on Lagrange:

“Scientific investigations are a sort of warfare, carried on in the closet or on the couch against all one’s contemporaries and predecessors; I have often gained a single victory when I have been half asleep, but more frequently found, on being thoroughly awake, that the enemy had still the advantage of me when I thought I had him fast in a corner—and all this, you see, keeps one alive.”

Quotes | By
The following are notes of praise and or tribute:

“Dynamics is the science of accelerating or retarding forces, and of the varied motions which they must produce. This science is wholly due to the moderns, and Galileo is the one who threw or made the first foundations.”