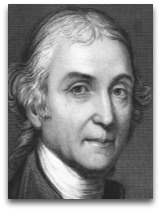 Electricity
In 1767, Priestly, noticing an analogy with the inverse square law of gravitational force, conducted some type of experiment with a charged shell and a small mass, placed exterior and interior to the shell, and thereby deduced the inverse square law of force between electric charges, some near two-decades before this would become known, famously, as Coulomb’s law, via the more publicized 1785, independent, experiments of Charles Coulomb. [3]

Gas laws
In c.1770, Priestly, building the work of Guillaume Amontons (1703), he became the first person, supposedly, to investigate the expansion of gases by heat, other than air; the following shows his apparatus and results: [5]

Influenced
In 1785, Charles Coulomb construction of a built a torsion balance (Ѻ), as shown, wherein, in an effort to prove Priestly's 1766 inference that the force of attraction or repulsion between two small charged spheres would be inversely proportional to the square of the separating distance, using Hooke’s spring law, and showed quantitatively that charged spheres haven an inverse proportionality relationship, which he explained formulaically (see: Coulomb’s law)

Religion
In 1772, Priestley, in his Institutes of Natural and Revealed Religion, argued against atheism, aiming instead to outline a combined: theism, materialism, and determinism theory.

In 1777, Priestley published his soul theory espousing Disquisitions Relating to Matter and Spirit: the History of the Philosophical Doctrine Concerning the Origin of the Soul, and the Nature of Matter; with its Influence on Christianity, Especially with Reflection to the Doctrine of the Pre-existence of Christ, wherein, supposedly, he espoused a materialist philosophy, which entailed denial of free will and the soul (specifically: he denied the materialism of the soul, while simultaneously claiming its existence, in some way), and argued that there is no mind-body duality. [4]

By 1782, over a dozen hostile refutations were published; Priestley was labeled an atheist.

In 1782, an anonymous “Mr. Hammon”, later said to be English chemist-physician Matthew Turner (Ѻ), or possibly two authors combined, published Answer to Dr. Priestley’s Letters to a Philosophical Unbeliever (Ѻ), in which he states: “as to the question whether there is such an existent being as an atheist, to put that out of all manner of doubt, I do declare upon my honor that I am one.” This statement, supposedly, is the first declaration of an overt or avowed atheist (see: atheism timeline) in Britain.

In 1791, Priestley’s London house and church were burned down by religiously-upset rioters (Ѻ); after which he was forced to flee to America.

Oxygen
In 1774, Priestley discovered oxygen, which he called "dephlogistated air", and attempted to redefine the old phlogiston theory; in opposition to Lavoisier’s newer caloric theory.

Phlogiston
In 1774 to 1786, Priestley, in his six-volume Experiments and Observations on Different Kinds of Air, published the results of a number of experiments he conducted on air, that worked to repudiated the last vestiges of four element theory, in which he attempted to situate his own variant of phlogiston theory. [1] Herein, according to English chemical thermodynamicist and chemistry historian Leslie Woodcock, Priestley posited phlogiston as the driving force for chemical reactions; thereby, supposedly, presaging Gibbs by some 200-years, a precursor to Gibbs free energy, in the following sense, as supposed by Woodcock: [1]

“Every thermodynamic material does indeed have a constitutive state function, (‘phlogiston’?), which can be given a definition: ‘minus the Gibbs chemical potential of oxygen within the material.’ It has the dimensions of (free) energy per mole of oxygen, and measures its oxidation propensity. While the antiphlogistonists may have been the first inorganic chemists, Priestley’s conceptual interpretation of phlogiston was the first attempt at the physical chemistry of reactions. If phlogiston is regarded as an alternative description of ‘Gibbs free energy,’ the theory appears to be an intuitively accurate description, as could reasonably be expected at that time, and remains essentially correct today given its precise thermodynamic definition.”

Other
Some of Priestley’s other noteworthy accomplishments, according to an overly-enthusiastic Leslie Woodcock, include: the description of atoms, 40 years before John Dalton; the hypothesis of the division of atoms, 150 years before Ernest Rutherford; the prediction of black holes, 200 years before Stephen Hawking; the positing of forces between atoms; 100 years before Johannes van der Waals; discovered photosynthesis and the carbon cycle; among others. [2]

“Will is nothing more than a particular case of the general doctrine of association of ideas, and therefore a perfectly mechanical thing.”