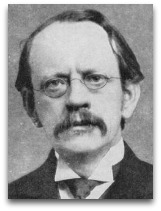 Overview
In 1897, Thomson, in his “On Cathode Rays”, discussed some of the results his cathode-ray experiments done to test some of the consequences of the so-called “electrified-particle theory”, as he called it, wherein he posited the existence of “negatively electrified particles”, previously dubbed “electrons”.
In 1904, using the geometrical pattern results of Alfred Mayer’s 1878 “floating magnets” experiment, Thomson famously posited the so-called “plum pudding” model of the atom, according to which negatively charged particles were embedded within a sea of positive charge. 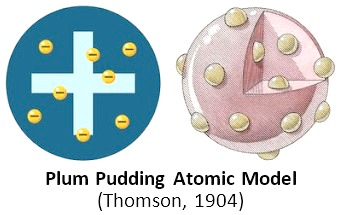 This was a big stepping stone in the history of atomic theory.
Rutherford
Thomson’s plum pudding model held sway until 1909, during which year Ernest Rutherford conducted his famous “gold foil experiment”, in which he fired positively charged alpha particles at thin sheets of gold foil, expecting the particles to pass through, only to be surprised that some of the particles bounced backwards, leaving him to conclude that the atom had most of its mass at the center characterized by a "positive central charge N e, and surrounded by a compensating charge of N electrons", and later coined the term 'proton' (1919) for this positive structure, i.e. the structure of hydrogen nuclei specifically. [2]

Quotes | By
The following are quotes by Thomson:

“The atoms of the elements consist of a number of negatively electrified corpuscles [see: electron] enclosed in a sphere of uniform positive electrification [see: proton].”