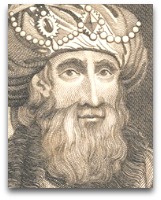 In existographies, Josephus (c.37-100AD) (IQ:155|#535) (Cattell 1000: 645) (CR:7), aka "Flavius Josephus", was a Roman-Jewish historian, scholar, and hagiographer, oft-cited in the silent historians problem on whether or not he refers to a "Jesus" as the "Christ", a factoid that was “unknown to” Origen (c.230AD), who had copies of Josephus; he also conjectured that the Jewish exodus was based on the 1300BC expulsion of the Hyksos from Egypt.

Moses
In c.80AD, Josephus, citing Manetho, conjectured that the expulsion of the Hyksos from Egypt (c.1600BC) (see: supreme god timeline) was the origin of the mythical story of the Jewish exodus. (Ѻ)(Ѻ)

In 94AD, Josephus is purported (Ѻ) to have said the following about a was man named Jesus: [3]

“Now there was about this time Jesus, a wise man, if it be lawful to call him a man; for he was a doer of wonderful works, a teacher of such men as receive the truth with pleasure. He drew over to him both many of the Jews and many of the Gentiles. He was [the] Christ. And when Pilate, at the suggestion of the principal men amongst us, had condemned him to the cross, those that loved him at the first did not forsake him; for he appeared to them alive again the third day; as the divine prophets had foretold these and ten thousand other wonderful things concerning him. And the tribe of Christians, so named from him, are not extinct at this day.”

This passage, however, as William Smith, in his The Silence of Josephus and Tacitus (1910), points out, was “unknown to” Origen (c.230AD), who had copies of Josephus, and also unknown to earlier writers, such as Irenaeus, Tertullian, and Clement of Alexandria, which points to the conclusion that this was “interpolated in” by a later post-Origen Christian hand; it is invented history, so to say. [7]

Quotes | On
The following are quotes on Josephus:

“Several learned men have testified their surprise at not finding in the historian, Flavius Josephus, any mention of Jesus Christ; for all men of true learning are now agreed that the short passage relative to him in that history has been interpolated. The father of Flavius Josephus must, however, have been witness to all the miracles of Jesus. Josephus was of the sacerdotal race and akin to Herod’s wife, Mariamne. He gives us long details of all that prince’s actions, yet says not a word of the life or death of Jesus; nor does this historian, who disguises none of Herod’s cruelties, say one word of the general massacre of the infants ordered by him on hearing that there was born a king of the Jews. The Greek calendar estimates the number of children murdered on this occasion at fourteen thousand. This is, of all actions of all tyrants, the most horrible. There is no example of it in the history of the whole world. Yet the best writer the Jews have ever had, the only one esteemed by the Greeks and Romans, makes no mention of an event so singular and so frightful. He says nothing of the appearance of a new star in the east after the birth of our Savior — a brilliant phenomenon, which could not escape the knowledge of a historian so enlightened as Josephus. He is also silent respecting the darkness which, on our Savior’s death, covered the whole earth for three hours at midday — the great number of graves that opened at that moment, and the multitude of the just that rose again.”

“Claims of Mary’s authenticity would never stand up in a court of law because, apart from what is written in the Bible, there is little evidence of the existence of either Mary or Jesus Christ. Historians such as Josephus, Tacitus, Suetonius and Pliny the Younger, who are near-contemporaries of Mary and Jesus, are largely silent on the subject.”