Overview
In c.450BC, Herodotus, in his The History, pointed out that a group of religious leaders called the "Choen", or Cohen (modern), were high ranking Egyptian priest-teachers. [1]
In c.800 to 200BC, a religious reformation actuated, wherein a new "Judaism" religion was formulated out of the older atrophying "Egyptian" religions, along with pieces of neighboring religions; the following section, from John Spark's 1931 histomap (2000BC-1900AD), gives a general idea of respective "powers", in terms of world dominance, of the various cultures, changing century by century, wherein we see that as Egyptian-power began to wane, in about 1000BC, as shown below, although this date is likely off by several centuries, given more accurate dating scheme, so-called Hebrew-power began to grow: 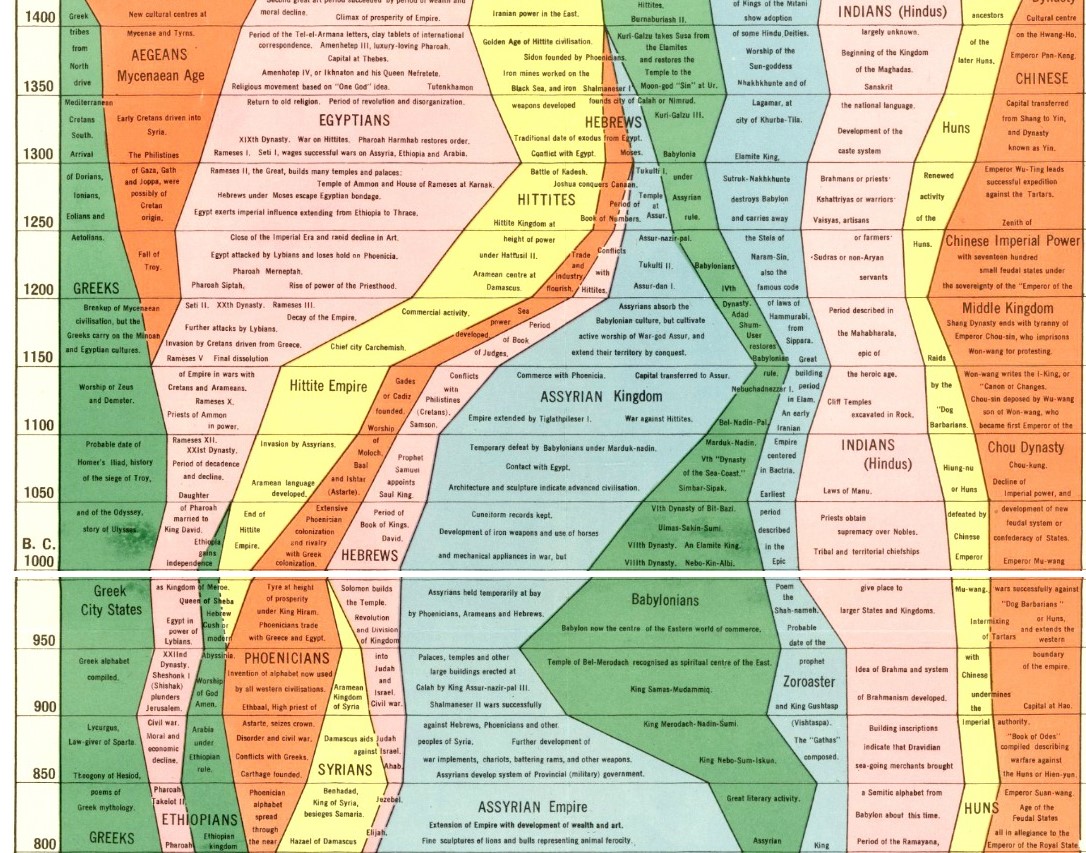 Now, when we look at this map, thinking about "Egyptian power" vs "Hebrew power", say as compared to Assyrian power, or Babylonian power, we must keep in mind that the term "religion" is Latin for ligare, meaning "to bind", according to which, the religion of any given cultural power, is, in effect, is the bonding force glue, that holds a given culture together, the exchange force for the underlying dynamics of the culture, so to say. Hence, when a given culture begins to atrophy or deteriorate in size, for whatever reason, in order to form a new culture, from the leaving migrants of the old culture, a "new" exchange force, has to be formulated, so that the "exchange" of ideas, concepts, and ideologies, of the newly-reformulated religion, or binding belief system, becomes or works as a new bond energy for the newly formed and growing culture.

In c.1850s, Samuel Dunlap, via citation to Franz Movers (1841), began to explain the general method by which the Hebrew religion form as a sort of truncate amalgamation of the surrounding gods of the land, albeit such that former "gods" were recast into Biblical "characters", thus reducing the number of worshiped gods, but while simultaneously retaining the former stories:

“In this way antiquity disposes of its sun-gods. The Hebrews turned [the gods] into Patriarchs. Adam, Abraham, Israel, were names of Saturn. Edom is Adam; and the ancient usage was to name the nation, the land or city after the chief god. The Greeks made these deities founders of tribes.”

“The Hebrew religion stepped out from the noblest side of the Dionysus-worship, influenced, no doubt, to some extent by Persian and Babylonian ideas, but still retaining the Phoenician impress.”

The following diagram shows the basics of the Hebrew redaction of extant Egyptian religion: 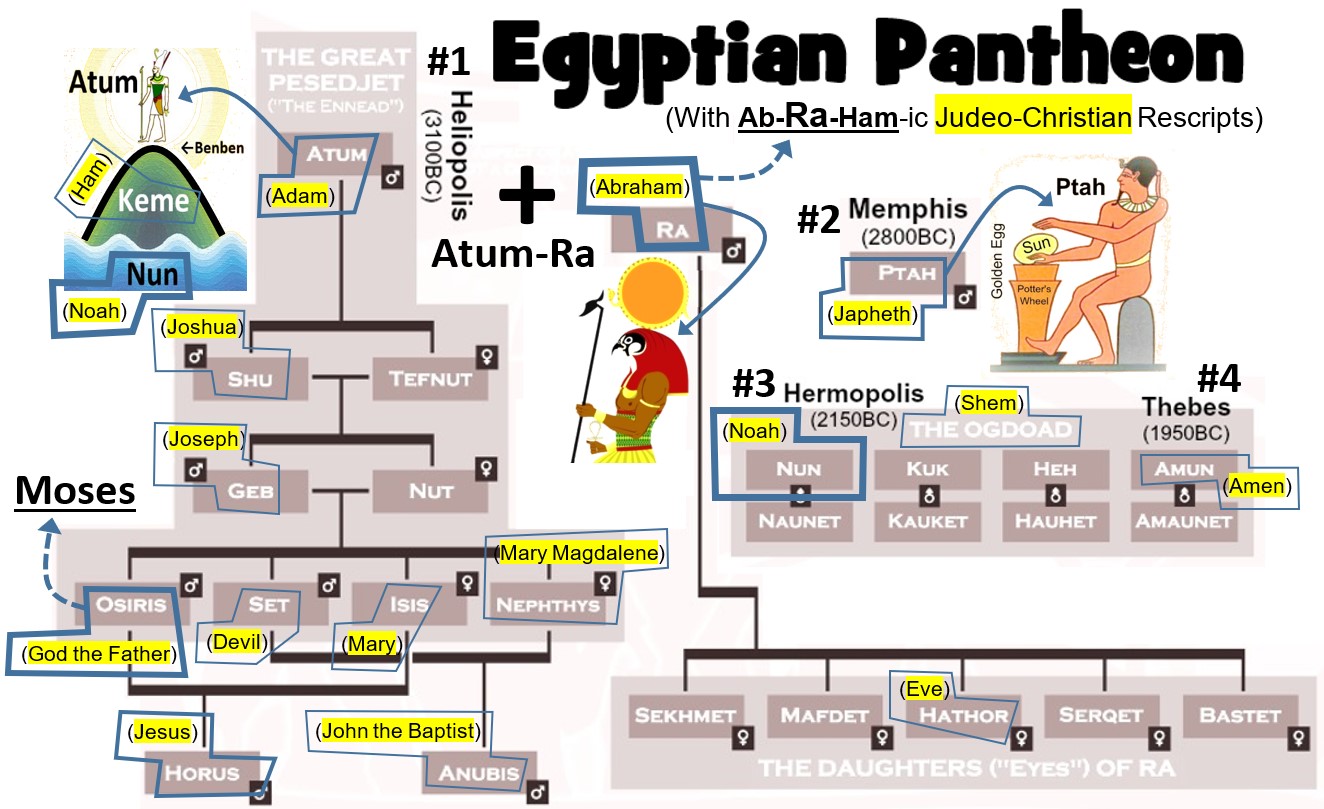 In this redaction, one of the key things done to unify the four main dominant religious sects of ancient Egypt, namely Heliopolis (#1 | 3100BC) (see: Heliopolis creation myth), Memphis (#2 | 2800BC) (see: Memphis creation myth), Hermopolis (#3 | 2150BC) (see: Hermopolis creation myth), and Thebes (#4 | 1950BC) (see: Thebian creation myth), was to script a story wherein the "two forms" of the god Nun, namely the Heliopolis version (3100BC), below left, wherein the land, or god Atum, with the black soil "keme" is born out of the waters of the Nun, and the Hermopolis version (2150BC), wherein in Nun was recast into an amalgamation of eight watery-chaos like gods called an "Ogdoad", into the Biblical story where in a man named Noah (Nun), descendant from a man named Adam (Atum), has three sons: Shem (Ogdoad), Ham (Keme), and Japheth (Ptah), from whom, via the Shem branch (see: religio-mythology genealogy), a man named Abraham (Ra) is born, form whose lineage a man named Moses (Osiris) is born; thereby affecting a unification of all extant previous belief system or cosmologies, albeit done in a god-to-prophet retelling of the earlier four creation myths.
The following, from the larger god character rescripts table, gives a better visualization of how these four main Egyptian god-like entities, Nun, Ogdoad, keme, and Ptah, were recast nearly in parallel in both Hindu mythology and Jewish mythology:
(add)
Documentary hypothesis
In 2000, Gary Greenberg, in his 101 Myth of the Bible (pg. 7), described what he referred to as "Hebrew redaction", in short, as follows:

“The Hebrew redactors used Egyptian myths to make the biblical stories; which, from time to time, had Babylonian myths grafted onto earlier texts or replaced portions of the original stories.”

In more detail, according to the documentary hypothesis, as summarized by Greenberg (2000) this redaction involved at least involving four source documents and one editor; summarized as follows:

In more detail, according to the so-called documentary hypothesis, first decoded by French Biblical scholar Jean Astruck (1753), who noted a distinction between the Jahvist god and Elohist god textual sources, these scholars or editor, took four Egyptian mythology source documents, aka the: J source (Jahweh theist), E source (Elohim theist), P source (theist concerned with Priestly matters, e.g. rituals, dates, numbers, measurements, etc.), and D source (theist who authored Deuteronomy), and syncretized the batch into the so-called Book of Moses. The dated origin of these different sources, including the Aten source (A source), are as follows: A source (1300BC), J source (1000BC), i.e. A morphed into J source, E source (922BC), J and E sources merged + commentary (722BC), D source (650BC), P source (586BC), final editor or redactor (500BC). [2]