In religions, Judaism (TR:10) is the name of the circa 500BC initiated religion adhered to by the Isis-Ra-El-ites, i.e. followers of the Canaanite recension (see: recension theory), the Amen-Ra (Yahweh/YHWH), Isis, and El god theogony, intermixed with Atenism (Akhenaten's god), e.g. Aten's finger penned the Ten Commandments, ideologies; the belief system espoused by the monotheism-minded branch of senior Egyptian priest-teachers called the ‘Choen’ (Cohen) (Herodotus, 450BC).

Overview
In c.450BC, Herodotus referred to the most senior Egyptian priest-teachers as the ‘Choen’, which is found in the modern Hebrew variant overly-common surname Cohen, the name of the teacher caste. [1] The Indo-Tibetan variant, to note, is chokhan meaning ‘adept teacher in chief’.

The following shows how the Egyptian "sidelock" of hair carried over from the Egyptian religion to the Jewish rescript of the former:

The following shows how the Egyptian skullcap of Ptah became the Jewish kippah or yarmulke: 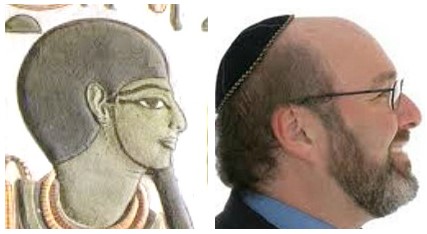 Afterlife | Beliefs
The following is a rare statement about Jewish afterlife belief:

“All Israel has a share in the world to come, as Isaiah said: and all of your people who are righteous will merit eternity and inherent the land. And these are the people who do not merit the world to come: (a) the ones who say that there is no resurrection of the dead, (b) those who deny the Torah is from the heavens, and (c) the Epicureans.”

In 1858, Samuel Dunlap, in his Vestiges of the Spirit of Man, citing Franz Movers (1841), stated that the Hebrews were the first to turn the ancient sun gods into patriarchs (see: god-to-prophet), therein mediating a de-deification or god reduction: [3]

“In this way, antiquity disposes of its sun-gods. The Hebrews turned [gods] into Patriarchs [see: god reduction]. Adam, Abraham, Israel, were names of Saturn. Edom is Adam; and the ancient usage was to name the nation, the land or city after the chief god. The Greeks made these deities founders of tribes.”

In 1935, Spivey, in his The Awakening of the Sixth Sense, state the Israel etymology as follows: [7]

“The prophet whom it is so important to vindicate is ‘Is-a-iah’. Is means light. Is-ra-el is: Is, the light of Ra, the sun, is El, the first cause. The Hebrews express Isis as Jesse, ... Is in Israel is identical with Isis, the Egyptian goddess of light; light meaning revealed wisdom, knowledge.”

In 1956, Hilton Hotema, in his Ancient Sun God, building on Samuel Dunlap (1858), devoted an entire chapter to “Ab-Ram the Sun-God”, in which he cites Dunlap as having said the following (hyphens included): [4]

“The fire-god of Ur was Ab-Ram. The Hebrew world ‘Ab’ means ‘father’, and Ram (head sign of the Zodiac) means ‘most high’. Ab-Ram and Is-Ra-El were names of Saturn.”

In c.2000, Jordan Maxwell, who, in his “The Solar Cult” (2000), lists (Ѻ) Hilton Hotema as his 6th recommended reading scholar, “Is Ra El” video lecture Q&A, gives a fairly cogent synopsis of how, in his view, Judaism was formed by the migration process wherein the Phoenician Canaanites, aka Hebrews, with their embedded religion of the Isis Cult and Amen-Ra religion, moved north and encountered the Palestine god El, whom Maxwell defines as the planet Saturn. [5]

“The [Judeo-Christian] Cosmogony, that is, the account of the creation with which the book of Genesis opens, has been taken and mutilated from the Zend-Avesta of Zoroaster, and was fixed as a preface to the Bible after the Jews returned from captivity in Babylon, and that the Robbins of the Jews do not hold their account in Genesis to be a fact, but mere allegory. The six thousand years in the Zend-Avesta, is changed or interpolated into six days in the account of Genesis.”

“The Hebrew religion stepped out from the noblest side of the Dionysus-worship, influenced, no doubt, to some extent by Persian and Babylonian ideas, but still retaining the Phoenician impress.”

“The Hebrew redactors used Egyptian myths to make the biblical stories; which, from time to time, had Babylonian myths grafted onto earlier texts or replaced portions of the original stories.”