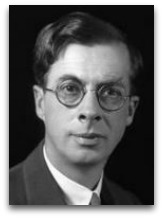 In hmolscience, Julian Huxley (1887-1975) was an English evolutionary biologist noted for his supposed view that the second law is inoperable in the case of evolution and for his 1940 discussion of the so-called experimental bias problem of the physical sociologist.

Julian Huxley's grandfather was Thomas Huxley, coiner of the term social chemistry, and his brother was Aldous Huxley, noted for his use of entropy in literature.

Overview
Huxley, supposedly, has the view that the attainment of greater complexity in the forms of life denies the second law of thermodynamics and the actions of entropy, in that: [1]

“While the universe of physics is running down; the universe of evolution is winding up … on this planet the second law of thermodynamics is now not working, and of course [this] opens up the possibility that there may be agencies operating in the universe supplying energy which would enable the whole cosmos to behave in an anti-entropic manner.”

Huxley was in correspondence with American prodigy William Sidis on the topic of the second law in relation to animate matter at least as early as 1916. Huxley began publishing views on the second law and evolution in his 1931 Science and Religion: a Symposium, views which he seems to cull from Arthur Eddington and William Thomson. [2] Huxley elaborated on his anti-entropy views in his 1953 Evolution in Action. [3]

In 1959, Huxley was professing the view that evolution is an antientropic process running counter to the second law of thermodynamics. [4]

“The second law of thermodynamics is entropic, tending towards a decrease in organization and to ultimate frozen immobility.”

In 1964, Huxley was commented on French philosopher Pierre Teilhard’s anti-entropy type theory of noosphere. [5] Likewise, previously, in an unpublished manuscript dated November 19, 1951 (dedicated to Julian Huxley), in a section titled "The Transformation, starting with Man, of the Process of Evolution", Teilhard defined anti-entropy as "an effect of changes that are seized, draws a portion of matter in the direction of continually higher forms of structurization and centration." [6] Huxley also had commentary on French philosopher Henri Bergson’s élan vital evolution theory.
d
Physical sociology | Experimental bias problem
In 1940, Huxley, in his “Science, Natural and Social”, stated the following: [7]

“… experiment for one fundamental reason—namely, that in the one case the investigator is outside his material, in the other he is not. Man cannot investigate man by the same methods he investigates external nature. He can use the methods of natural science to investigate certain aspects of man—the structure and …”

In 1942, Ruth Anshen, in her compendium Science and Man, wherein Huxley’s article is reprinted, penned a chapter entitled “Man as an Element of Every Experiment” seemingly on Huxley’s issue. [8]

In 1947, George Lundberg quoted Huxley as follows in this matter: [9]

“One distinguished scientist [Julian Huxley] has urged that a basic difference between the physical and the social sciences is that in the latter ‘the investigator is inside instead of outside his material.’ This is supposed to be self-evident and require no analysis.”

This seeming issue, Huxley raises, in the Morris Zucker on John Dewey sense of the matter, seems to be well-summarized as the problem of a chemical (or human chemical) in a retort (or social retort) trying to study its own reactions, to other chemicals, via the methods of physical science, e.g. hypothesis, testing, experimentation, measurement, theory, etc., while trying to maintain objective neutrality on its subject matter: which, paradoxically, is a system wherein its self is an admixture, of the social matter, so to say, he is trying to study; as depicted adjacent.