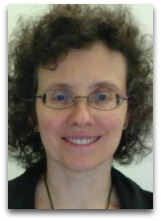 In thermodynamics, Julie Deborah Forman-Kay (c.1963-) is an American-born Canadian biophysical chemist note for her 1999 article “The ‘Dynamics’ in the Thermodynamics of Binding” in which she summarizes the logic that: [1]

“Whether two molecules will bind is determined by the free energy change (ΔG) of the interaction, composed of both enthalpic and entropic terms.”

This view summarizes a certain turning-point in the history of chemical bonding theory, that started when German physicist Hermann Helmholtz, in his 1882 article "The Thermodynamics of Chemical Processes", explained that the measure of chemical affinity of a reaction or the force of attraction between the reactants is free energy, followed by American physical chemist Gilbert Lewis who in 1916 outlined the logic of thermodynamic stability of bonding, in the context of free energy changes.