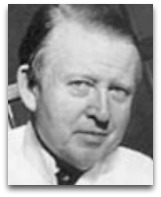 In existographies, Kaj Linderstrom-Lang (1896-1959) (SN:15) (CR:6), referred to as “Lang”, was a Danish chemical engineer, physiologist, and protein scientist noted, in hmolscience, for his 1956 parody article “The Thermodynamic Activity of the Male Housefly”, wherein he attempts to poke fun at those who attempt to apply simple models to complex systems, or something along these lines.

Spoofers
It’s difficult to say who he is spoofing exactly (Ѻ), but he does mention Ronald Fisher and reference #6 alludes to the idea that he’s spoofing Erwin Schrodinger’s What is Life (1943), or anyone who cites this. An intuitive guess might be that he is spoofing Alfred Lotka’s Elements of Physical Biology (1925), in one part of which, namely §6: The Fundamental Equations of Kinetics of Evolving Systems (pg. 59), Lotka gives a simple example of flies introduced into a house and equilibrium breeding levels that result as follows:

“To give a touch of concreteness to the discussion at this stage a very simple example may be given to illustrate how several equilibria may occur in a life-bearing system. A perfectly screened dwelling may be kept indefinitely free from flies. This is a condition of equilibrium, but of unstable equilibrium; for if only a few flies gain access, presently these will breed, and the room will become inhabited by a population of flies whose number will depend on the amount of food present, on the measures taken to combat the pest, etc. Unless these measures are very active, the flies will not be wholly exterminated, but the population will attain some approximately steady number (for a given season) . There are, then, in this case, two possible equilibria; one with a zero population of flies, the other with some positive number of fly population.”

Lotka's general aim is to explain evolution via physical chemistry, namely as thermodynamically irreversible process; this, therefore, could be the main spoof candidate; though, to note, Lotka is not a key term found in Lang's Selected Papers.

Overview
In 1956, Lang published an humorous 20-page article entitled “The Thermodynamic Activity of the Male Housefly”, with a fictional co-author F. Fizz-Looney, wherein he gives a parody of simplified system models of overly-complex systems; the following is the abstract:

“The immense importance of applying chemico-physical methods to biology has gained world-wide recognition in recent years. Not even the most miserable scientific sparrow falls to the earth without the fateful god of mechanical statistics having something to do with it. Still, there are a few realms within which this power has not yet taken charge, and the present article is written with the purpose of showing where and how it can be applied in an entirely new fashion and whither this application may lead us in our struggle for bigger and better science. [1]

[N1] By special courtesy the present article was accepted without having passed the usual five referees. An American friend of the author has however pointed out to him that it is inadvisable to go the whole hog in the direction of broken literary English, and it will therefore be attempted—in places—to adopt the Standard American Scientific Language whose meaning will be clear even to the luniest [see: crackpot or madness].
[N2] Except from exercise.”

Shown adjacent, is Lang's fly osmometer, with a semi-permeable membrane. [1]

The following equation, to get “some idea of the flavor of his article”, as John Schellman (1997) puts it, is Lang's Schrodinger equation for the male housefly: [4]

where H, supposedly, is the Hamiltonian operator of the wave function of the fly and E is the energy of the state of the fly, or something along these lines. Lang, also in the article, calculated the pressure vs temperature plot (PT diagram) for houseflies where it is shown that the “fly pressure” increase up to about 60°C, above which there is a mysterious and precipitous drop to zero. [4]

Education
In 1914, Lang began to study chemical engineering, or “factory engineering” as it was called then, during which time he edited a magazine called Student Chemists, at that time also having aims to become a playwright. [3] He then was briefly employed at the Agricultural Research Laboratory, under the direction of A.C. Andersen (1882-1970), then in 1919 transferred to the Carlsberg Laboratory, then divided into chemical and physiological research, headed by Soren Sorensen (1869-1939). In the 1920s, Lang, supposedly, began applying the recent physicochemical thermodynamic theories put forward by Gibbs, Lewis, Bronsted, and Bjerrum to proteins; after which, he completed his PhD, on some type of thesis on casein, at the University of Copenhagen. [3] In the 1950s, Lang, then famous for his protein science and or proto protein thermodynamics, work, was a sought after speaker, particularly in America.

Quotes | On
The following are quotes on Lang:

“He was one of the most gifted, generous and lovable men I have ever met, and is remem­bered, indeed worshiped, by those who came in contact with him, particularly those who had the experience of working in his lab­oratory.”

“One well established and generally accepted method of treating systems which are complicated beyond comprehension is to construct simple models and see whether they fit the systems in question. If they do, you will immediately become suspicious, and so will your colleagues most certainly, with the result that a blooming literature sprints up (or breaks out) dealing with the problem of how you have managed to make all your errors cancel one another. If they do not fit, the beauty of the models themselves may shine for years untainted by the squalid awkwardness of reality.”

“Are flies comparable to macromolecules? Yes.”