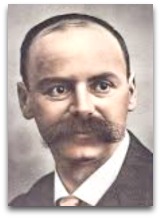 In existographies, Karl Schwarzschild (1873-1916) (IQ:#|#) (GPE:95) (GAE:20) (CR:2) was a German physicist and astronomer, noted in radiation thermodynamics, for his 1915 derivation of the so-called the “Schwarzschild radius”, which is the radius of the event horizon of a non-rotating black hole.

Overview
In Dec 1915, Schwarzschild, while serving in WWI stationed at the Russian front, solved Einstein’s general relativity field equations, using a spacetime-themed polar coordinate system, to calculate the radius of an event horizon around a non-rotating black hole, as follows:

where Rs is the Schwarzschild radius, G is the gravitational constant, M is the mass of the star, and c is the speed of light. Schwarzschild wrote the following to Einstein on his solution:

“As you see, the war treated me kindly enough, in spite of the heavy gunfire, to allow me to get away from it all and take this walk in the land of your ideas.”

Einstein, himself, in early 1915, been able to obtain a partial solution of his field equations, specifically on the advance of the perihelion of Mercury, using rectangular coordinates. Einstein responded to Schwarzschild:

“I have read your paper with the utmost interest. I had not expected that one could formulate the exact solution of the problem in such a simple way. I liked very much your mathematical treatment of the subject. Next Thursday I shall present the work to the Academy with a few words of explanation.”

Education
Schwarzschild was, supposedly, a child prodigy, who by age 16 published two papers of note. [1]