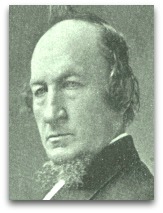 Overview
In c.1840s, Heinzen came under the influence of Ludwig Feuerbach and the so-called “scientific materialists”, namely: Jacob Moleschott, Ludwig Buchner, and Karl Vogt, who sought to replace religion with an atheistic philosophy based on scientific materialism. [2]

In 1846, Heinzen, in his Six Letters to a Pious Man, presented a series of letters, in the form of a pamphlet, which contain the confession of the belief of an ‘atheist’ in concise form; the following is the main section of his pamphlet:

“If no ‘god’ exists or can exist beyond mankind or the world, then he can have revealed nothing to them from beyond; nothing is revealed to the mind of man except that, which he develops out of himself or the world. As further the spirit cannot have come in the world from beyond, but must have always been in it, thus it cannot return to a ‘god’ from whom it did not proceed; therefore, it quietly remains in the world. I too believe in ‘immortality’, in as much as I believe in the immortality of the world. But in a personal continuance of man I of course do not believe, neither does it interest me, having once recognized the impossibility of it. Even to you it must be indifferent, if you do not straight-way believe in the resurrection of the flesh with skin and bones. For from what other motive would you wish your existence continued, if not because you hope to continue, after death, your individual life, and indeed, if possible, with other human beings, whose individuality is endeared to you? But what forms your individuality? Nothing but the union of your flesh, your blood, your nerves, etc. Dissolve this union, destroy but one single part of this organic, corporal combination, and the product of the same, ‘Reverend N.’ , is likewise vanished or changed; and even though you assume a separate continuance of the spirit, after this dissolution, you can only conceive this ‘spirit’ as perfectly indifferent, that is, provided you do not reconnect it with the remaining parts of your personality. I do not imagine the spirit separate, neither in man nor in the whole world, but consider it as not without existence, and existence not without life, and life not without ‘matter’ and matter again not without life.

But this is ‘materialism’! you will exclaim. Yes, it is materialism! ‘Materialism’ in a like manner to ‘atheism’ has become an epithet of abuse, which is applied by narrowmindedness and ill-will to that which they do not understand, or which is inconvenient to them. I maintain that in the world there can be nothing immaterial. And what is lost by it? Is that which we call ‘soul’, thought, feeling &c, less soul, thought, feeling, because I do not separate them from matter? Would you have the perfume of the flower without the flower? Abusing ‘materialism’ is the most stupid thing in the world. As long as it is found necessary to bring the sensitive and material, that is, the existing to be acknowledged and respected, so long there can be no talk of a general happiness and general rationality. As long as people need the ghosts of things instead of their substance, so long will they bother themselves with chimeras. The mind is nothing but the result of an organic combination of physical powers. The universe is, as it were, a chemical, magnetical, electrical, etc., laboratory, in which, the material powers (also called vital powers) consummate their unceasing changes and transformations. Where one formation ceases [final state], another begins [initial state]. Even the corpse of man lives; but this is no longer human life, it is only the life of ‘anorganic’ nature [see: inorganic life], to which the human form, after its dissolution, returns, and out of which ‘organic’ nature reproduces itself. There is nothing dead in the world, and dying implies only a retransformation to the material of common life. But if the ‘special spirit’, which is the subject of contest, the spirit of a single human being, is to reappear, there must from that material, by way of generation and sustenance, an organic human form be redeveloped; and how you are to imagine the reproduction of all the millions of individual human forms, which have returned to that material, remains with yourself. Where is the perfume of the flower, when the flower is withered? Where is the spirit of man, when man is deceased? With the same right, wherewith you claim a resurrection of man, I might claim a resurrection of the flowers. And that animals have as much claim to your ‘immortality’ as yourself, is a matter of course.”

Here, we see well-honed logic, given the period. Se see, generally, a panbioism-themed materialism, retained with some type of ill-defined "non-special spirit", presumably something akin to the conservation of energy [?], which makes for the continuity of individual.

In 1846, Heinzen was became involved in the so-called “Der Zürcher Atheismusstreit 1846” (Ѻ) or the “Zurich atheism dispute 1846”; adjacent is a cartoon (Ѻ) of the dispute.

Associates
Heinzen was close friends with: Wendell Phillips, William Garrison, Charles Summer, and Marie Zakrzewska; along with Ludwig Feuerbach and Arnold Ruge, whom he was acquainted with.

Terrorism
In 1853, Heinzen, in his “Murder and Liberty”, was one of the early theoreticians of terrorism (Ѻ); the anarchist Johann Most derived most of his theories from Heinzen. [3]

Education
In 1827, Heinzen, after attending school in his hometown Grevenbroich and in Kempen Heinzen, began to study medicine at the University of Bonn, where he became a member of Corps Guestphalia Bonn in 1828. In 1829, Heinzen, aged 20, was relegated from the university for a speech in which he accused his teachers of narrow-mindedness and condemned the lack of academic freedom.

Quotes | On
The following are quotes on Heinzen:

“Heinzen was a born satirist, he spared neither friend nor foe; opposition he could not tolerate; the value of tact and cooperation he never learned. A courageous seeker after truth, he could not compromise with truth as others saw it. The most intellectual of all the German revolutionists, he never mastered the English language and his works with very few exceptions became known to only a limited few.”

Quotes | By
The following are quotes by Heinzen:

“The universe is nothing more than a physical and chemical laboratory in which material powers carry on an unceasing change and transformation. The mind is nothing but the result of an organizing combination and cooperation of physical and physiological powers.”

“There is no greater contradiction than mind and god.”

“We need a new savior. His common name is ‘reason’, but he is not accustomed to sign himself with this name always, because now-a-days every rascal calls himself reason. The real name of the savior is ‘atheism’ or ‘unbelief’, in other words, the belief in reason, the spirit of truth and the will to make these the ruling powers. ... Yes, the new savior of the world is the spirit of truth—is radical heathenism—is the sovereign human nature. This armed with the besom of knowledge and science first sweeps the broad spaces of the universe dear of the spectres and harpies which have hitherto tortured poor mortals on this very tolerable earth, where no ‘lord god’, and no devil, but only the reasoning, free, human being ... makes its household arrangements as a democratic republic and provides for all humanity, woman as well as man, food, lodging and education.”