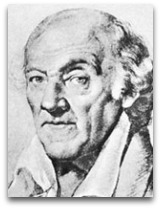 Overview
Knebel’s translations of Lucretius’ On the Nature of Things (De Rerum Natura) (2 vols, 1821) have been praised.

Knebel and Goethe were intimate friends, since their first acquaintance. Knebel, as a former tutor of Grand Duke Karl August—who appointed Goethe a member of the privy council in 1776 and later Minister of State—was the person who had brought Goethe to Weimar.

Little girls | Comment
On 7 Feb 1810, a famously cryptic dialogue interaction took place between Knebel and Goethe, about what he thought of Elective Affinities, the dialogue of which, as reported by as reported by Karl Ense (1843) is as follows, as summarized by Astrida Tantillo (2001): [1]

Goethe: “What did you think of Elective Affinities?”

Knebel: “I couldn’t stomach it.”

Goethe: “I did not write the book for you, but for young girls.”

Goethe: “But I didn’t write it for you, I wrote it for little girls!”

Hollingdale
English-born translator and Nietzschean scholar Reginald Hollingdale reasoned that Goethe made this statement ‘to assert that the book is altogether wholesome and romantic and that only a moralizing old man could find anything in it to object to’. [2]