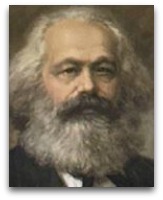 Overview
In 1837, Marx began to be attracted to the mental pantheism ideas of Georg Hegel (1770-1831), who thought Christianity was the best of the religions, but yet offered a new “secular morality” in which "community" replaced god (see: god replacement) as the arbiter of good and evil. [1] Some of this "community" god replacement logic seems to echo in Marx as follows:

“Let the ruling classes tremble at a Communist revolution. The proletarians have nothing to lose, but their chains. Workers of the world unite!”

In this time, Marx went to a café where the “young Hegelians” (Ѻ) frequented, where he met Bruno Bauer, characterized as one of “fieriest atheists” of the period, and early Jesus myth proponent. [11]

In summer 1841, after Bauer began to edit a journal called Atheist Archive, which didn't pan out, he and Marx wrote an atheist pamphlet that got Bauer fired and made it impossible for Marx to find work in academia. [11]

In 1841, Marx finished his dissertation entitled "Difference Between the Democritean and Epicurean Philosophy of Nature," from which his conception of historical materialism, and its near synonym description “scientific socialism”, coined by Friedrich Engels, supposedly, arose based on research on the materialism philosophy of Epicurus, as well as his reading of Adam Smith, and other writers in classical political economy. [9]

Bauer | Feuerbach
Marx, sometime after his Bauer interaction, then found Ludwig Feuerbach, and was struck by his idea of religion as a man-made invention, and his claim that by studying it, we could learn about ourselves; shortly thereafter, he found that he could no longer agree with Bauer, and traded "Hegelian idealism" for "philosophical materialism". [11]

Purpose
Marx envisions a human as a “purposive producer” (Ѻ), supposedly, of sorts, similar to how a spider is a weaver, a bee an architect; about which he says the following:

“A spider conducts operations that resemble those of a weaver, and a bee puts to shame many an architect in the construction of her cells. But what distinguishes the worst architect from the best of bees is this, that the architect raises his structure in imagination before he erects it in reality. At the end of every labor-process, we get a result that already existed in the imagination of the laborer at its commencement. He not only effects a change of form in the material on which he works, but he also realizes (bring into reality) a purpose of his own that gives the law to his modus operandi, and to which he must subordinate his will. And this subordination is no mere momentary act.”

Economic laws of motion
The following is Marx’s stated amenable aim of his 1867 three volume Capital: a Critique of Political Economy, from his preface: [6]

“Even when a society has got upon the right track for the discovery of the natural laws of its movement—and it is the ultimate aim of this work, to lay bare the economic law of motion of modern society—it can neither clear by bold leaps, nor remove by legal enactments, the obstacles offered by the successive phases of its normal development. But it can shorten and lessen the birth-pangs.”

In this objective, Marx seems to make a slight chemical analogy blunder in his effort to promote his macroscopic or organic holism study perspective: [7]

“The body, as an organic whole, is more easy of study than are the cells of that body. In the analysis of economic forms, moreover, neither microscopes nor chemical reagents are of use.”

Here, Marx seems to dismiss the application of human chemistry to economic analysis, as in science of economic chemistry, as useless.

Thermodynamics
Supposedly, Marx began discussion thermodynamics in his 1867 Capital. The following 1926 comment by English radio chemist Frederick Soddy gives an idea of this: [5]

“Indeed, nowhere in Capital probably does Marx so excel himself in vituperation as in his description of the founder of thermodynamics as ‘an American humbug, the baronised Yankee, Benjamin Thompson (alias Count Rumford) …”

The pair, Marx and Engels, together they were said have debated and or given commentary on the implications of the newly forming universal science of thermodynamics on economic theory; although, it seems to be the case that Engels was the main commenter on this topic, supposedly discussing the economic thermodynamics work of Ukrainian social-physicist Sergei Podolinsky with Marx in the early 1880s. It is difficult, to note, to actually track down exactly publication where Marx comments on the emerging science of thermodynamics, but his name frequently pops up in paradigm discussions connected to economic thermodynamics, often those connected to, for instance, Charles Darwin (1859) and Rudolf Clausius (1865). [1]

The 2006 social internal energy minimization theory of Iranian-born American engineer Robert Kenoun is based, in larger part, on the works of Marx. [4]

Students
A vicarious student of Marx was Polish social economist Leon Winiarski, one of the first to teach the thermodynamics of German physicist Rudolf Clausius in sociology and economics. In 1886, at the age of twenty-one, Winiarski was a student at Warsaw University, where probably with the help of his brother Wolf Winiarski, tried to keep up the tradition of spreading Marxist ideas among the first Polish scientists. He authored two pamphlets of this kind: “About Cries and their Sources” and “On Supplementary Values”, being a popularization of Karl Marx’s Das Kapital. [2]

Quotes | On
The following are quotes on Marx:

“Marx stands in the same relation to his predecessors in the theory of surplus value that Lavoisier maintains to Priestley and Scheele (Ѻ) … He saw that he had to deal neither with dephlogisticised air, nor with fire-air, but with oxygen.”

Quotes | By
The following are noted quotes by Marx:

“Gassendi, who freed Epicurus from the interdict laid down on him by the fathers of the Church and the whole of the middle ages (see: middle ages genius) — that age of materialized irrationalism. It is more a case of Gassendi learning philosophy from Epicurus than being able to teach us about Epicurus’s philosophy. Gassendi attempt to make Epicurus cohabitate with the church is like throwing the habit of a Christian nun over the exuberant body of the Greek Lais. Philosophy, so long as a drop of blood shall beat in its heart, being absolutely free and master of the universe, will never grow tired of throwing to its adversaries the cry of Epicurus.”

— Karl Marx (1841), “Difference Between the Democritean and Epicurean Philosophy of Nature” [12]

“Religion is the sigh of the oppressed creature, the heart of a heartless world, just as it is the spirit of a spiritless situation (or soul of soulless condition) (Ѻ). It is the opium of the people. The abolition of religion as the illusory happiness of the people is require for their real happiness.”

Further reading
● McNally, David. (2006). “Marx, Machinery, and Motive Power: the Thermodynamics of Class Struggle”, WindEnergyInstitute.net.
● Foster, John B. and Burkett, Paul. (2008). “Classical Marxism and the Second Law of Thermodynamics: Marx/Engels, the Heat Death of the Universe, and the Origins of Ecological Economics” (abs), Organization & Environment, 2: 3-37.