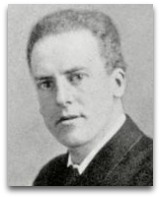 In existographies, Karl Pearson (1857-1936) (IQ:170|#331) (CR:55) was an English mathematician-physicist, philosopher, lawyer, statistician, evolutionist, Germanic literature scholar, noted for his 1885 lecture "Matter and Soul", wherein he puts the extrapolate down argument in the form of an Aunt Sally in regards to consciousness and life (as a mechanism), supposedly, arisen from "dead mechanism", and for his 1892 book Grammar of Science, the first book read in German physicist Albert Einstein's 1902 "Olympia Academy" study group, which expands on the former in regards to what physics has to say about life.

Consciousness
In 1885, Pearson, aged 28, in his "Matter and Soul" lecture, gave us the following very telling argument, wherein he puts the extrapolate down argument in the form of an Aunt Sally in regards to consciousness and life (as a mechanism), supposedly, arisen from "dead mechanism": [3]

“But I fancy one of you objecting: This may be very true, but it neglects the fundamental distinction between matter and life, namely the phenomenon of consciousness. Very good, my dear sir, let us endeavour to analyse this phenomenon of consciousness, and see whether denying consciousness to matter may not be just as dogmatic as asserting that matter possesses it. Now let me ask you a question: Do you think I am a conscious being, and if so, why? The only answer you can give to that question will be agnostic. You really do not know whether I am conscious or not. Each individual ego can assert of itself that it is conscious, but to assert that that group of sensations which you term me is conscious, is an assumption, however reasonable it may appear. For you, sir, I and the rest of the external world are automata, pure bits of mechanism; it may be practically advisable for you to endow us with consciousness, but how can you prove it? You will reply: I see spontaneous actions on your part, similar to those I can produce myself. I am compelled by analogy to endow you with will and consciousness. Good! you argue by analogy that I have consciousness; you will doubtless grant it to the animal world; now you cannot break the chain of analogy anywhere till you have descended through the whole plant world to the simple cell, there you find apparently spontaneous motion and argue life—consciousness. Now I carry your argument a step further and tell you that I find in the ultimate atom of matter most complex phases of motion and capacity for influencing the motion of others. All these things are to me inexplicable. They appear spontaneous motion; ergo by analogy, dear sir, matter is conscious.

Excellent argument indeed! This is one of the stepping stones to the defunct theory of life position. Pearson’s “Matter and Soul” lecture, to note, seems to have been a reaction against English statesman William Gladstone’s spark-controversy article “Dawn of Creation and of Worship”, published the month prior, which was an aggressive attempt to simultaneously discredit what Gladstone called “solarism”, or a solar myth origin to all religions, and to defend the book of Genesis in modern scientific terms. [4] The article spurred on what came to be called "Gladstone-Huxley controversy", in that Thomas Huxley jumped into the debate on the side of science.

His 1892/1900 Grammar of Science, digs into aspects of the defunct theory of life (e.g. “there is no single sense impression which can be said to be that of life”), relativity, and the issue of irreversibility in nature, via his very unique discussion of a superluminal relativistic Maxwell's demon (Filon-Pearson demon), that can watch evolution in reverse, among other deep topics, and was the first required reading book of Albert Einstein's (IQ=220) so-called Olympia Academy intellectual club.

Grammar
In his opening chapter on life, Pearson states:

“The object of our Grammar so far has been to investigate the radical concepts of physics, the basis of that ‘dead’ mechanism to which science is popularly supposed to reduce the universe. In the course of the investigation we have had occasion to call in question several of the notions commonly associated with these physical concepts; we have seen that in speaking of matter and force much of our current language requires to be remodeled for scientific purposes.”

A recent example of such language remodeling is the 2012 introduction of the term "chnopsology" as a replacement term for biology. The following are noted quotes from Pearson's Grammar of Science:

“One system of planetary gravitation is accepted throughout the civilized world, but more than a dozen distinct theological systems and almost as many philosophical systems hardly suffice even for our own country.”

Life theory | Defunctness
A few example quotes of Pearson's attack on the theory of life include:

“There is no single sense impression which can be said to be that of life.”

“How, therefore, we must ask, is it possible for us to distinguish the living from the lifeless if we can describe both conceptually by the motion of inorganic corpuscles?”

“Those who believe that the organic has been developed from inorganic, that living has proceeded from dead ‘matter’ [dead matter], may then assert that there must be in matter ‘something-which-is-not-yet-life-but-which-may-develop-into-life’ (see: half-alive theory), and may fitly term this side of matter supermateriality.”

The second edition (or possibly the third edition), quite interestingly, contains and appendix section note “On the Reversibility of Natural Processes”, wherein Pearson discusses a "relativistic" conceptualized Maxwell's demon that can travel away from the earth at a speed greater than that of light and observe history in reverse. Pearson states that this conception of historical change and of time as a problem in relative motion was suggested to him by French-born English mathematical physicist Louis Filon.

Edition
In the expanded 1900 second edition, Pearson added on two chapters on the numerous inconsistencies resulting from the collision of physical science with biological science, citing the theories of Lloyd Morgan, among others, resulting to outline what would eventually come to be known, in the 21st century, as the defunct theory of life. [1] In the 1911 third edition, Pearson expanded further, dividing the book into two separately published parts, in the second of which, as he states, “there is much also to be added to the chapters dealing with living forms, where progress in the last ten years has been as great as in the physical branches of science.

Other
In 2005, Theodore Porter, an American social science historian, in his Karl Pearson: the Scientific Life in a Statistical Age, discussed some of the reactions to the Christian apologetic stylized paradoxical philosophy of Peter Tait and Balfour Stewart. [2]

“Even the prolific Leonhard Euler, whose collected works are still being published more than two centuries after his death, falls short of Pearson in sheer volume—a moderate collection of his works occupies 5 feet of shelf space”

Quotes | By
The following are quotes by Pearson:

“What is this word ‘life’ for him who has only existed in order to hand down his name to posterity in the footnotes of a classic or as an inventor of an integral. [To answer this question] I rush from science to philosophy, and from philosophy to our old friends the poets; and then, over-wearied by too much idealism, I fancy I become practical in returning to science. Have you ever attempted to conceive all there is in the world worth knowing — that not one subject in the universe is unworthy of study? The giants of literature, the mysteries of many-dimensional space, the attempts of Boltzmann and Crookes to penetrate nature's very laboratory, the Kantian theory of the universe, and the latest discoveries in embryology, with their wonderful tales of the development of life — what an immensity beyond our grasp! … Mankind seems on the verge of a new and glorious discovery. What Newton did to simplify the planetary motions must now be done to unite in one whole the various isolated theories of mathematical physics.”

“There is, for example, the principle of inertia, the statement that no physical corpuscle need be conceived as changing its motion except in the presence of other corpuscles, that there is no need of attributing to it any power of self-determination (p. 287). There are probably those who think some power of self-determination must be ascribed to the elementary organic corpuscle, but this seems very doubtful. Placed in a certain field, environed with other organic or inorganic corpuscles, the life-germ moves relatively to them in a certain manner.”