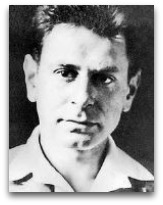 In existographies, Karl Popper (1902-1994) (IQ:165|#280) (RGM:1182|1,500+) (Stokes 100:94) (GPhE:25) (CR:25) was an Austrian-born English philosopher, noted for his 1919 falsifiability model of good science, according to which to know if something is true or not, e.g. a new theory like relativity, there must be a way to test it, e.g. measure during an eclipse if the mass of the sun bends light, and for his latter discussions on the arrow of time in relation to entropy as well as his critique on general laws of science.

Falsifiability | Science vs. pseudoscience
In 1919, at the age of 17, Popper reflects on how there were many “theories” in the air, the three dominating his mind being: Albert Einstein’s relativity, Karl Marx’s theory of history (historical materialism), Sigmund Freud’s psycho-analysis (psychodynamics), and Alfred Adler’s individual psychology, and that the problem that troubled him was the following: [3]

“'When should a theory be ranked as scientific?' or 'Is there a criterion for the scientific character or status of a theory?' The problem which troubled me at the time was neither, 'When is a theory true?' nor, 'When is a theory acceptable?' My problem was different. I wished to distinguish between science and pseudo-science; knowing very well that science often errs, and that pseudo-science may happen to stumble on the truth.”

Popper states that he began to grapple with this problem in the “since the autumn of 1919”, after becoming impressed with recent May 1919 confirmation of Einstein’s light bending prediction of his relativity theory via Arthur Eddington’s solar eclipse expedition: [4]

Shown adjacent, we see a photo, by Cambridge Observatory director Arthur Eddington, who led an expedition to observe the total solar eclipse of May 29, 1919. During an eclipse, the sky gets dark enough that you can see stars, even close to the Sun. So Eddington set out to map the position of the stars when they were close to the Sun (right image), and see how the Sun bent the light (middle image) and to see if his measurements matched up with Einstein’s prediction, Newton’s prediction, or would light not bend at all? [5]

Popper used this Einstein-Eddington based "theories which can be confronted with observations or experimental results" model as his "falsifiability" test, which separates science from pseudoscience; according to which bad, nonscientific theories could not be falsified. [6]

Thermodynamics
In 1950s, Popper seems to have published a number of articles in which he claimed, without reason or evidence to support his assertion, that the second law has no importance on a cosmic scale. [1]

In 1991, Popper seemed to conclude that Ilya Prigogine’s version of open systems, far from equilibrium, that producing or exporting entropy to the surroundings, creating internal order, resolves the Boltzmann-Planck idiom that “molar disorder” tends to a maximum versus life as a tendency to order paradox. [2]

Quotes | By
The following are quoted by Popper:

“Parmenides’ theory may be described as the first hypothetico-deductive theory of the world. The atomists took it as such; and they asserted that it was refined by experience, since motion does exist. Accepting the formal validity of Parmenides’ argument, they inferred from the falsity of his conclusion the falsity of his premise. But this meant that the nothing — the void, or empty space — existed. Consequently, there was now no need to assume that ‘what is’ — the full, that which fills some space — had no parts; for its parts could now be separated by the void.”