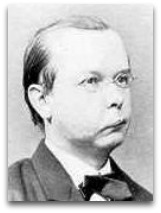 In hmolscience, Johann Karl Friedrich Zollner (1834-1882), variously cited as J.C.F. Zollner, J.C. Friedrich Zollner, Karl Zollner, Carl Zollner, or Friedrich Zollner, was a German astrophysicist noted for his 1872 book The Nature of Comets: Contributions to the History and Theory of Knowledge—a treatise on the physics of comets, intermixed with a Immanuel Kant and Arthur Schopenhauer based critical-philosophical account of the nature of knowledge, along with some type of four-dimensional space model based on physics of Hermann Helmholtz.

Helmholtz
Zollner is known to have been the arch enemy, in some respects, of German physicist Hermann Helmholtz, with whom he had a prolonged heated debate with. In 1874, Helmholtz wrote his “On the Use and Abuse of the Deductive Method in Physical Science”, a general attack on Zollner, in which he commented the following: [1]

“I do not find in Mr. Zollner's book a distinct declaration by which his new mode of procedure may be distinguished from that generally followed. Judging from what he aims at as his ultimate object, it comes to the same thing as Schopenhauer's metaphysics. The stars are to love and hate one another, feel pleasure and displeasure, and to try to move in a way corresponding to these feelings. Indeed, in blurred imitation of the principle of least action (pp. 326, 327), Schopenhauer's pessimism, which declares this world to be indeed the best of possible worlds, but worse than none at all, is formulated as an ostensibly generally applicable principle of the smallest amount of discomfort, and this is proclaimed as the highest law of the world, living as well as lifeless.”

Spiritism
In 1875, Zollner visited English physical chemist and spiritualism advocate William Crookes, views about which he intermixed with his previous Theory of 4-Dimensional Space (1867) work, to pen the 1878 book Transcendental Physics, in an attempt to validate concepts such as “clairvoyance, matter transfer, ghosts and natural spirits” in terms of physics.