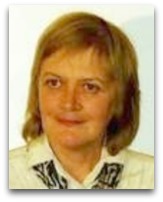 In existographies, Katalin Martinas (1947-) (CR:3) is a Hungarian physicist, thermodynamicist, noted for her c.1992 to present efforts in formulating a theory of economic thermodynamics. []

Overview
In 1986, Martinas, together with Tibor Pacher, published “Extended Thermodynamics in the Early Universe” (Ѻ), the abstract of which is:

“It is a general belief that in some early stages of the evolution of the universe unequilibrium situations played important role. In order to incorporate some deviations from thermal equilibrium into the description of the evolution, here an extension of the thermodynamic formalism is given, where, using the notion of ekaentropy, new terms are introduced into the Gibbs-Duhem relation for representing the deviation. Two situations are investigated in simplified models: the primordial thermalization in the symmetric phase of grand unification theory (GUT), and the development of a nonthermal distribution for massive neutrinos.”

In 1987, Martinas, together with Lazlo Ropolyi, penned “On the Hidden Aristotelian Thermodynamics”. [5]

In Jul 1990, Martinas gave a talk on “Aristotelian Thermodynamics”, at the Thermodynamics: History and Philosophy: Facts, Trends, Debates Conference, Veszprém, Hungary, wherein she attempts to argue that Aristotelian physics can be interpreted “irreversibly”, and that therefore it has a close relation to irreversible thermodynamics; and idea which she says she got from reading Karoly Simonyi’s The Cultural History of Physics, who interpreted Aristotle’s physics as the dynamics of movement with friction, after which “this gave us the idea that the Aristotelian dynamics is the dynamics of thermodynamics”, as she says. [4]

In 1993 to 1994, Martinas was a visiting fellow at INSEAD ( Fontainebleau ) Environmental erőforások management group, whereat she came into contact with Robert Ayres, who worked there.

In 1994, Martinas, with Robert Ayres, penned “A Non-Equilibrium Evolution Economic Theory” (Ѻ), the abstract of which is:

“There are good arguments for asserting that the economic system evolves irreversibly, in some sense, at the macro-level. Not only is this notion consistent with the second law of thermodynamics (Georgescu-Roegen, 1971); it is also suggested by the analogy with biological evolution that has been noted a number of times (Faber & Proops 1986; Ayres 1988b). Finally, it makes strong intuitive sense that economic progress should follow in parallel with the irreversible increase in human knowledge.”

In 1995, Martinas, with Robert Ayres, penned “Waste Potential Entropy: the Ultimate Exotic” (Ѻ); this was followed by “Exergy, Waste Accounting, and the Life-Sycle Analysis” (1998) (Ѻ), by Martinas, Robert Ayres, and L. Ayres.

In 1997, Martinas, in her “Entropy and Information”, attempted to talk about a concept she called “embodied information” and to argue that this could be measured in entropic terms, and, supposedly, attempts to give an “information balance” for the production of aluminum chloride. (Ѻ)

In 2007, Martinas, together with co-author Attila Grandpierre, penned “Thermodynamic Measure for Nonequilibrium Processes”, wherein they attempted to use the “extropy” concept to for formulate a new second law for non-equilibrium conditions, biological or otherwise.

In 2020, Martinas had the following abstract, on her faculty page, as the general overview of her general economic thermodynamics model:

“We have shown that one of the main obstacles to understanding thermodynamics is the confusion of energy. The concepts corresponding to the energy remaining, consumed and produced must be separated and precisely defined. Extropy (extropia): When discussing terrestrial processes, the use of entropy is cumbersome (in practice, the change in entropy is unpredictable), an equivalent description is given by extropy, which measures the distance from equilibrium in entropic units. The numerical value of extropy is relatively easy to determine for real systems.

We have shown that the axioms of thermodynamics (theorems I and II) only led to the existence of absolute entropy, and thus to the conclusion that irreversibility can be characterized only by entropy because a possible natural but unnecessary assumption was also accepted. The assumption: The amount expressing irreversibility is constant in an adiabatic (without heat transfer) reversible process. Clausius showed that heat transfer divided by absolute temperature results in an amount (entropy) that can only increase in an isolated system. However, other quantities are obtained if constancy is required in a different process. For example, if we prescribe that in a process in which the workability of the system does not change, the quantity should be constant, then the extropy is obtained. We have given the statistical-physical meaning of extropy. The phenomenological equivalent of Kullback entropy is extropy.

Economics: Our goal is to develop an economic description in which physical constraints can be incorporated. The economy is a complex system in which material, information, energy and cash flow (use, production) take place. Through interactions, the actors of the economy change and thus also change their environment. Economic processes are therefore simultaneously physical, biological, economic and evolutionary processes. We have shown that it is possible to build an economic model that also incorporates the laws of thermodynamics. The current theory characterizes the actors with the utility function, in which thermodynamic constraints are not or very difficult to incorporate. In the new model, the status of economic actors is characterized by the 'wealth measurement function'. In this theoretical approach, economic agents are characterized by the amount of tangible assets (stocks) they own. Sets, as physical objects, can be characterized by physical metrics (mass, energy). The law of mass retention and II. the prevailing of the main theorem in economic processes requires that the actors of the economy have a loss avoidance rule, this is the no loss rule.”

Other
In 2020, Martinas signed on to speak at the Thermodynamics 2.0 conference, with a talk on “Thermodynamics for Evolution”. [3]

Quotes | By
The following are quotes by Martinas:

“Analogous properties of chemical and economic processes are well known for a long time. Kalman Szily, a physicist, gave a lecture in 1871 with the title ‘Communistic State of the Physical World”, where he used some economic examples to explain the first and second law of thermodynamics. In 1903, just 100 year ago, when von Neumann was born, Bela Jankovich (1865-1939) (Ѻ) published a paper, entitled ‘Mechanical Foundation of Value Theory’, on the mechanical foundation of value. Imre Fenyes, professor of thermodynamics, emphasized the similarity between the economic goods and the thermodynamic quantities. Micro­economics and thermodynamics are both based on the idea of exchange. In thermodynamics the irreversibility of exchanges is a key idea and one that is sometimes difficult for my physics students to understand. So about 15-years ago [c.1992], I went looking for examples of irreversibility in economic theory that I could use in my teaching of thermodynamics. What I found, however, was no irreversibility in the neoclassical paradigm. As a physicist this struck me as preposterous and incredible. Without irreversibility, microeconomics might be a wonderful mathematical theory, but it could not offer a theory of economic activity. This encounter marked the beginning of my long-term interest in economic research. In 1986, with Andras Brody and Konstantin Sajo [Brody et al., 1986, 1994] I wrote a paper based on the irreversible properties of exchanges, where we showed the existence of an ‘economic entropy’ function for neoclassical economics. Later, it became clear that this paper was a mistake. A lot of concepts were used simultaneously with different thermodynamic and economic interpretations. Thermodynamic interpretation did not coincide with the neoclassical interpretation. Neoclassical economics is basically a static theory without irreversibility [Samuelson, 1983]. The structure of neoclassical economic theory and that of thermodynamics are distinctly different. Later, with Robert Ayres, I started to elaborate a non-neoclassical economic theory based on the framework suggested by the irreversible thermodynamic theory. When it was finished, it was easy to show that this approach reduces to the Neumann model in the case of a Neumann economy. On the other hand, the equilibrium approach of neoclassical economics to economic processes kills the possibility of the incorporation of irreversibility of economic processes, as well as the material side of economic actions. The Neumann model is not in the neoclassical trend.”

— Katalin Martinas (2007), “Von Neumann: a Chemist’s Approach to Economics” (§2.1: A Quick Summary of the History of Economics and Thermodynamics” [7]

Education
In 1965, Martinas completed a degree in accounting from the English department of Kossuth Lajos School of Economics, then in 1970 a degree in physics from Eotvos Lorand University (ELU / ELTE) (Ѻ). In 1974, Martinas was doing research on the “total entropy density of a general superconductor” and “thermodynamic stability of superconducting magnetic states”. [6] In 1984, she completed her PhD in the area of superconductor thermodynamics at ELU, after which she became a professor in the low temperature physics department of ELU, becoming chairperson of the thermodynamics section of ELFT. [1]