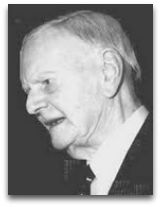 In thermodynamics, Keith James Laidler (1916-2003) was an English physical chemist noted for a number of well-researched books dealing with the history of physical chemistry, with particular focus on energy and thermodynamical considerations, particularly his 1993 The World of Physical Chemistry, which has become sort of a classic to many physical chemists. [1] Laidler was a noted expert on chemical kinetics, on the subject of the energy disposition of molecular reactions.

Education
Laidler completed his BA in chemistry in 1934 from Trinity College, Oxford and his MA and DSc in physical chemistry (kinetics) at Oxford in 1938. Laidler, at Oxford, notably attended the lectures of Walther Nernst.

Quotes | By
The following are quotes by Laidler:

“Maxwell's theory of electromagnetic radiation alone places him among the great scientists of all time.”