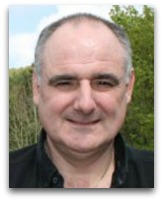 In human physics, G. Keith Still (1959-) is a Scottish mathematician and crowd dynamics researcher and consultant noted for his 2000 PhD dissertation “Crowd Dynamics”, having been supposedly downloaded over 60,000 times, in which, in his section 2.5.1 "Why is the Fluid Analogy Untenable?", he presents the view that human fluid and human particle computational analogy models are untenable in modeling the dynamics of crowds because, in his own words: [1]

“The laws of crowd dynamics have to include the fact that people do not follow the laws of physics; they have a choice in their direction, have no conservation of momentum and can stop and start at will. They cannot be reduced to equations which are appropriate for the movement of ball bearings through viscous fluids.”

This is funny stuff indeed: “people do not follow the laws of physics”! Humorous to the last. No doubt physicists Philip Ball and Mark Buchanan would disagree with this position. [5]

Crowd dynamics
Still became interested in the nature of crowd dynamics and how to map the way in which crowds move when he visited a rock concert in 1991. In 2011, Still comments on his foray into crowd dynamics: [4]

"When I started, in the early 90s, there was no formulated science on crowds," he says. Crowd-modelling was based on analyses that treated masses of people like fluids. "But people don't behave like that," he says. "They don't move in neat, linear ways."

Still has since consulted and worked in the planning of events such as the Sydney and Beijing Olympics and the Royal Wedding. He has since developed interesting experimental technologies such as the “crowd pressure monitoring suit”, shown adjacent, which supposedly measures or gauges “crowd pressure”, possibly in collisions or impacts per minute—which seems to be a potential type of human thermodynamic instrument. [1]

Mecca
The adjacent image shows the famous annual crowd at Mecca, Saudi Arabia, during the Hajj, occurring each year on the 8th to 12th day of the last month of the Islamic calendar, during which time, on average, some 200 people are crushed to dereaction (death) owing to “critical density” crowd dynamics.

In 2004, following trampling incident at the Jamarat Bridge, where some 251 people were trampled to dereaction, Saudi Arabia’s King Fahd created a high-level commission to develop a multibillion-dollar plan to restructure the holy sites of the Hajj and called in Still who is described, by Wired Magazine, as the “world’s leading expert on crowd dynamics”. [4]

Critical density
Still as determined that critical density occurs at a human social space or personal space density of four people per square meter. He explains this as such: [4]

"To analyse a crowd, Still says, you must determine the comparative rates at which people arrive, are served and then disperse. If the speed at which they arrive is greater than that at which they are served, a queue will form. However, arrival and serving rates are rarely constant. As the size of a crowd increases, so does the rate at which it flows, until a critical density is reached. At this point the speed at which it is moving suddenly decreases. People have less room, so the crowd immobilises itself. For humans, this critical density is typically four people per square metre. At that concentration, there is not enough room to move without bumping into someone else. Moreover, if someone falls, a cascade effect causes people in front to knock into their neighbours in a propagating wave. This is what has caused many of the deaths in Mecca."

This sounds to be something akin or similar to the concept of critical mass.

Education
Still completed his BS in the physical sciences in 1981 at Robert Gordon’s Institute of Technology, Aberdeen, and his PhD in in mathematics in 2000 with a dissertation on “Crowd Dynamics” at the University of Warwick. [1] Still currently is a professor of crowd dynamics at Bucks New University, United Kingdom and has been a crowd dynamics consultant, at various events, for at least two decades.