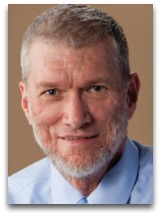 In hmolscience, Ken Ham (1951-) (CR=13) is an Australian-born American creationism evangelist noted for his 1975 antagonistic popularization of the phrase “molecules-to-man evolution” which he employs as a polemical device in debates—his popular 2014 Creationism Museum with Bill Nye in particular—as a tool to stump the evolutionist on vexing questions such as the origin of life, among others of similar nature, e.g. mind-from-matter.

Overview
In the early 1970s, Ham, while in high school, began to reject the concept of “molecules-to-man evolution”, per religious reasons; namely, as a child, his father taught him that one had to accept ever word of the old testament, and to reject any one point of the entire system, would mean one would have to reject the entire testament, and that one's life depended on this; as Ham, in 2008, put it frankly:

“[My father] was always very adamant about one thing - if you can't trust the Book of Genesis as literal history, then you can't trust the rest of the Bible. After all, every single doctrine of biblical theology is founded in the history of Genesis 1-11. My father had not developed his thinking in this area as much as we have today at Answers in Genesis, but he clearly understood that if Adam wasn't created from dust, and that if he didn't fall into sin as Genesis states, then the gospel message of the New Testament can't be true either.”

This, to note, seems to well-encapsulate the tension felt in the mind of nearly half of America, if not more.

In 1974, Ham, while in college, became influenced by John Whitcomb and Henry Morris’ The Genesis Flood (1961)

In 1975, Ham began using the phrase “molecules-to-man evolution” in his science class teachings, then later began to publish, into the 2000s, works using the term.

In 2006, Ham, in his Raising Godly Children in an Ungodly World, began to employ the explicit hyphened phrase “molecules-to-man evolution” as follows:

“Whether it was the worldwide flood, the feeding of the 5,000, or arguing against the possibility that man evolved from molecules to ape to man over millions of years, dad defended the word of God as if his life depended upon it … which, in fact, it did. He was always adamant about one thing: if you can’t trust the Book of Genesis as literal history, then you can’t trust the rest of the Bible.” (pg. 19)

Here, we see why Ham, naturally enough, would go on to become the curator of the AnswersInGenesis.com website and the Creation Museum, i.e. they are byproducts of a vexation between two possibilities seeded into his mind as a youth.

In college, at Queensland Institute of Technology, Ham obtained a BS in applied sciences, with focus on environmental biology, during which time his textbooks, in biology, geology, and other subjects, filled with evolutionary ideas, explained the following to him: [1]

“My textbooks laid out what claimed to be convincing proof that we progress from molecules to man without any outside influence. I was further taught ideas on how the universe was formed—but they all involved naturalistic processes. God wasn’t involved at all.”

“This small booklet [The Genesis Flood (1961)] gave me a number of biblical arguments about why Christians can’t accept molecules-to-man evolution and the Bible’s record of origins at the same time.”

“One of the first times this really hit me was during my first year as a science teacher in 1975. In my class were the true native Aborigines, tribal descendants of the first tribes that settled in Australia long before the Europeans came. Because of evolutionary thinking, the aborigines have been oppressed and even killed. Those who committed the atrocities often claimed that the Aborigines (who tend to be darker skinned than Europeans) were ‘lower’ [see: Darwin on ‘lower’ and ‘higher’ in terminology] on the evolution chain, and therefore sub-human. As I taught the class, I made sure that my students were taught the problems with molecules-to-man evolution and the idea that the earth is millions of years old. I shared some of the arguments I had gleaned from The Genesis Flood and other sources that supported the biblical account of origins. I explained that I did not believe man evolved from ape-like ancestors, but that the account of the creation of Adam and Eve was true—we were all descendants of to people.”

In 2013, Ham began employing the phrase “molecules-to-man” in his online AnswsersInGenesis.com article titles. [2]

In 2014, in his YouTube debate with Bill Nye, the science guy, Ham frequently employed the term “molecules-to-man evolution” as a sort of pejorative labeling tactic to shut Nye—an electrical engineer by education—up into silence.

“Though atheists make their own “meaning” or “purpose” while alive, ultimately atheism is all meaningless, purposeless, and utterly hopeless.”