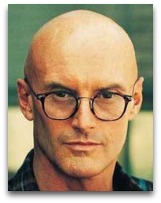 In existographies, Ken Wilber (1949-) is an American auto-characterized “integral philosopher”, conceptualized, supposedly, as a mixture of Pierre Teilhard, Alfred Whitehead, Stuart Kauffman, Ilya Prigogine, and Erich Jantsch, and possibly with a bit of Deepak Chopra, noted for []

Overview
In 1999, Wilber, in his Sex, Ecology, and Spirituality, outlined a model of spirituality and consciousness that attracted many people.

In the early 2000s, Wilber, then one of the leading author in new age book stores, was then becoming semi-famous for his so-called “integral theory”, the gist of which being that no one is 100% error proof, therefore one should attempt to integrate not the errors of each person, but rather what is correct about everyone’s views, or something to this effect.

In 2005, Wilber was giving room-packed seminars.

In the years to follow, however, Wilber's views began to fall off via attacks from academics combined with his online statements, e.g. “enlightened teachers can make crops grow twice as fast by blessing them”. [1]

Quotes | By
The following are quotes by Wilber:

“I have one major rule: Everybody is right. More specifically, everybody — including me — has some important pieces of truth, and all of those pieces need to be honored, cherished, and included in a more gracious, spacious, and compassionate embrace.”