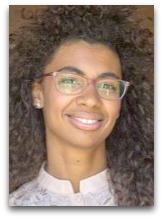 Overview
In 2011, Krueger, after completing her graduate work in electrical engineering, engaged in work in the semiconductor industry and worked at SPIE and their advanced lithography laboratory, during which time she began to struggle, introspectively, in a disillusioned sense, with where the technology was going, who was utilizing it, and how it was helping society; to quote: (Ѻ)

“When I was a graduate student in electrical engineering, I realized that science was not just about exploring the external world but also about understanding ourselves. This thought began a journey of reconciliation. In a world that is so divided both scientifically and socially, I see the new stories we will tell of a more interconnected and intersectional universe.”

In 2014, Krueger quit her engineering job, and began to focus on building a social intersectional framework themed on “science of and for the people”.

In 2017, Krueger taught a course entitled “The New Science”, wherein class 12 was on “states of being”, based on probability, heat, thermodynamics, and entropy. (Ѻ)

In Oct 2017, Kreuger gave a talk on how people are wave-particle dualistic [see: human wave function]; the following are images (Ѻ)(Ѻ) from the talk:

In 2017, Krueger won the Consciousness in Action Award (Ѻ) from the institute of Noetic Sciences for her work at the intersections of science and social justice.

On 8 May 2018, Krueger, hosted an event, at the Heal Denver center, entitled “The Thermodynamics of Love, People, and Justice: Physics and Mindfulness in the Context of Social Change”, the abstract of which is as follows: [1]

“What do social justice and physics have in common? Dynamics. Energy dynamics. Thermodynamics studies how systems with different energies reconcile together. The social justice movements of today asks us to do the same. We as individuals, as particle-wave beings, as communities with different experiences, trauma and love have to come together to live, heal and grow. Perhaps then, there may be some inspiration from each of these wisdom schools to guide on another. In this interactive workshop we will playfully weave through the art and science of entropy, kinetics, liberation theory and restorative justice. Join us on this journey of reconciliation.”

The following quote comes to mind:

The following (Ѻ) is a slide or flyer on Krueger's views of entropy: 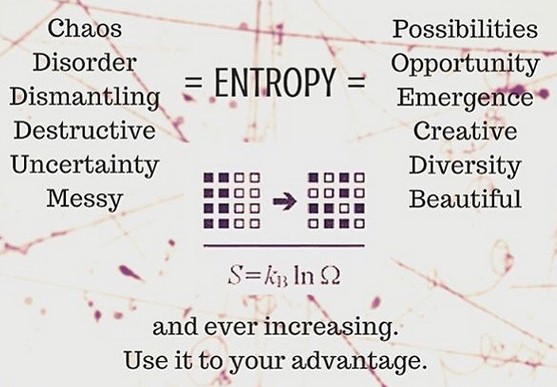 New Age | Ontic openings
Of note, many of the underlying tenets of Krueger’s views veer into the new age and or ontic opening side of the metaphysical fence; to quote (Ѻ), from a recent ThinkStories.com (c.2018) profile on her:

“Each classroom is an “exploratory space” where students can read about chakras, or spiritual centers of energy, and look at fossils under a microscope in the same afternoon. The space offers students a chance to explore their physical and spiritual worlds using many different knowledge bases, not just the Eurocentric scientific canon that dominates American education.”

Examples of this include her: 2012 re-blog (Ѻ) of weather predictions and prophecies, in the context of Noah and the flood (see: Noah’s flood) and Moses and the ten plagues; her 2012 re-blog (Ѻ) of the Arthur Clarke themed quote: “politics and religion are obsolete. The time has come for science and spirituality”; her 2016 Instagram photos (Ѻ) of “tantric energy” models; her use of James Lovelock, and his living earth theory, her use of Rasheedah Phillip’s 2015 Black Quantum Futurism (Ѻ), and its conjecture that people can “manipulate space-time in order to see into possible futures, and or collapse space-time (see: wave function collapse) into a desired future in order to bring about that future's reality”; and chaos theory, which she used in 2017 to teach the “science of magic, love, and community.” Her 2017 chalkboard photo (Ѻ) of notes gives clear indication that she is an “information = energy” stylized emergentist.

Education
In 2009, Krueger completed her BS in electrical engineering, with focus on nano structures and materials, at Rensselaer Polytechnic Institute, and in 2011 completed (Ѻ) her MS in electrical engineering, with focus on electronic, with a minor in physics and astronomy, focusing on nanomaterials and optics, at the University of Colorado Boulder, in some parts of which she specialized in thermodynamics and material science, and presently is an adjunct professor of Naropa University, Denver, Colorado.

Quotes | By
The following are quotes by Krueger:

“I believe science can be a tool for personal liberation, allowing individuals to actively observe and question our inner world. This precious balance of scientific method and mindfulness can unlock the capacities of our conscious and unconscious mind.”

References
1. Krueger, Kendra. (2018). “The Thermodynamics of Love, People, and Justice: Physics and Mindfulness in the Context of Social Change” (Ѻ), EventBrite.com, Denver, Colorado, May 08.
2. Why – 4LoveANDScience.com.