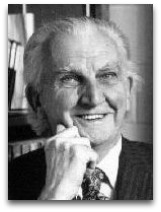 In existographies, Kenneth Boulding (1910-1993) (CR:22) was an English-born American economist noted, in ecological economics, for his 1966 to 1978 entropy theories, of the material entropy variety, and ideas applied in ecology and economics.

Overview
In 1956, Boulding, supposedly, was a developer of general systems theory.

In 1964, Boulding, in his The Meaning of the 20th Century, devoted a chapter to what he calls "The Entropy Trap", later cited by Jeremy Rifkin (1980), , where he argues that a post-civilization will arise when a “mutation” makes all men geniuses, after which a “society specializing in spiritual experiences” will emerge. [4]

In 1966, Boulding, in his “The Economics of the Coming Spaceship Earth”, introduced the term “material entropy”. [5]

In 1978, Boulding, in ecodynamics, introduced a view of entropy and the second law in relation to social evolution. [1]

Some cited Boulding as having introduced the concept of entropy in ecological economics, particularly on the subject of waste material management. [2]

Some have argued that the science of economic thermodynamics began following the publication of Boulding’s famous 1966 article “The Economics of the Coming Spaceship Earth”, in conjunction with Romanian mathematician Nicholas Georgescu-Roegen’s 1971 book The Entropy Law and the Economic Process, after which economist became interested in the subject. [3]