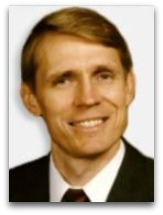 In hmolscience, Kent Hovind (1953-) (CIR:2) is an American creation science evangelist noted, in religious thermodynamics, for a number of 1990s video lectures, mostly to church groups, it seems, wherein he employs science concepts, albeit in a semi-twisted manner to argue for the existence of god, often filled with humor.

Overview
In the 1990s, Hovind began employing a dumbed-down use of the first and second law of thermodynamics, which he learned, in his own words, from reading numerous high school science books, to disprove evolution, in particular the "thermodynamic law says that all systems towards disorder", hence evolution is false (systems seen to be increasing in order), and thus humans were created by god. [1]

Quotes | Employed
The following are quotes often employed by Hovind in his arguments:

“The second law of thermodynamics is man’s description of the prior and continuing work of a creator, who also holds the answer to the future destiny of man and the universe.”

“Evolutionism is a religious worldview not supported by science, scripture, popular opinion, or common sense. The exclusive teaching of this dangerous, mind-altering philosophy in tax-supported schools, parks, museums, etc. is a clear violation of the First Amendment.”