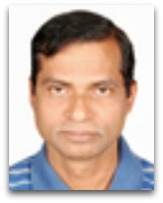 In existographies, Kishore C. Dash (1961-) (CR:5) is an Indian physicist, part of the Indian school of econophysics, noted for his 2009 to present involvement in Eugene Stanley (1995) based history of econophysics, an example of which include his 2014 chapter “Evolution of Econophysics”, in the book Econophysics of Agent-Based Models, on agent based econophysics, edited by Bikas Chakrabarti, Anirban Chakraborti, Frederick Abergel, Hideaki Aoyama, and Asim Ghosh. [1]

Origin
Dash explains the origin of his interest in econophysics as follows: [2]

“In 2006 May, I overheard from some commerce professors that ‘stock market is not gambling, it is science’. I was a bit curious. In the same year in the month of Nov, during my refresher course at Calcutta University, I was fortunate to attend few classes of Bikas Chakrabarti, senior professor of Physics, Saha Institute of Nuclear Physics, Kolkata on “A Brief History of Economics”. It was amazing and amusing on my part to know that there is a branch of physics called as ‘Econophysics’. Later on in Mar 2007, I was able to present a poster and short talk on ‘Multiphase Transition of Stock Prices and Stock Indices’ in the International workshop on “Econophysics of Markets and Business Networks” under the banner of ‘Econophysics Kolkata – III’, using thermal physics, based on my experience of teaching undergraduate students. It was certainly due to the influence of Chakrabarti’s talk delivered in Calcutta University during my refresher course.”

Econophysics | History
In early 2014, Dash was attempting to assemble a draft chapter to become book on a history of econophysics, and was seeking to co-author with Libb Thims, to publish with Cambridge University Press, e.g. via Simon Capelin. [4]

Education
Dash completed his PhD on “Small Angle X-Ray Scattering Study of Pure, Cancerous and Infected Human Bones”. His research interests are in the area of small angle x-ray scattering (SAXS), fractals, and econophysics. [3] Dash currently a reader in physics, at Neelashaila Mahavidyalaya, a college in Rourkela, India.