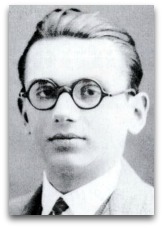 In science, Kurt Godel (1906-1978) (IQ:170|3351) [RGM:268|1,320+] (Stokes 100:95) (Murray 4000:N/A) (CR:21) (library: 700 books) was Austrian-born logician, mathematician and philosopher, noted for his 1931 incompleteness theorems, two main theorems in total, used by many as an ontic opening argument, the first of which states that in any formal (mathematical or logical) system that is internally consistent (i.e. contains no contradictions), there will be some well-formed propositions that cannot be proven either true or false. [1] Godel is also known for his 1931 Godel’s demon (see: scientific demon).

Time
In 1949, Godel produced a proof that in any universe described by relativity, time cannot exist; a conclusion that, supposedly, was semi-endorsed by Einstein. [3]

“According to Godel’s theorem all consistent axiomatic formulations of rigorous theories cannot be complete propositions. That is to say, no theory can explain itself because there cannot be a general law that is both logical and finite. Any self-referential system must be either incomplete or inconsistent. Thus, human reason cannot explain completely anything as complicate as itself, since to do so require more connections than are available in the brain.”

Arnopoulos, naturally enough, tags Godel’s theorem in amid his general discussion of ontic opening theories, namely: the uncertainty principle and the law of conservation of information.

Godel's incompleteness theorem was used in John Boyd, somehow, in his successful war thermodynamics based invasion design of the first Gulf War (1990-1991).

“I like Islam, it is a consistent idea of religion and open-minded.”

“Ninety percent of [contemporary philosophers] see their principle task as that of beating religion out of men's heads. … We are far from being able to provide scientific basis for the theological world view.”

Genius rankings
Godel’s name frequently comes up in genius IQs rankings. Godel is a Pickover top 14 “most influential” GME; some think his “incompleteness theorem” ranks him up with Aristotle (IQ=195) (video: “The World’s Most Incredible Mind”, 2011), which seems a bit overzealous; 8+ thread posts on him.

Voltaire | Leibniz
Godel, supposedly, has the following to say about Voltaire: (Ѻ)


His aversion to Voltaire, likely had something to do with the fact that Godel was a Leibniz proselyte, and a transmigrationist, supposedly (Ѻ). The answer to his question is: Nikola Tesla, who read some 100-volumes of Voltaire: “I had a veritable mania for finishing whatever I began, which often got me into difficulties. On one occasion I started to read the works of Voltaire when I learned, to my dismay, that there were close on one hundred large volumes in small print which that monster had written while drinking seventy-two cups of black coffee per diem.﻿ It had to be done, but when I laid aside the last book I was very glad, and said, ‘Never more!’”