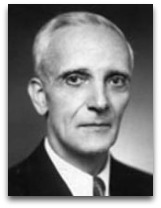 In existographies, Léon Brillouin (1889-1969) (GS:9) (CR:60) was a French-born American physicist noted in information thermodynamics, for his 1956 book Science and Information Theory in which, building on the work of American electrical engineer Claude Shannon, who he worked with at IBM as director of electronics education (1948-53), he uses a hodgepodge of mathematical derivation to make connections between thermodynamics and information, in which he employed a mixture of term negentropy and cybernetics arguments [1]

Life principle
As early as 1949, seeded by Erwin Schrodinger's 1944 What is Life?, Brillouin was search for a supposed “life principle” to be active in living structures as a sort of remedy against the second law. His entire argument, as is the case in these sorts of grasps at historical vitalism, seems to have been rather nonsensical. Brillouin’s basic argument is that a living organism has special properties, namely: resist destruction and healing ability, which do not appear in inert matter, hence we must accept a life principle that allows for such exceptions to the second law. He states: [2]

“When life ceases and death occurs, the ‘life principle’ stops working, and the second principle regains its full power, implying demolition of the living structure.”

The basic problem here is that nowhere in German physicist Rudolf Clausius’ 1865 mechanical theory of heat (thermodynamics) is there any supposition that the second law implies demolition of living structure, nor does the thermodynamics explicitly differentiate as to two types of bodies, there is only the hot body, the cold body, and the working body.

Harvard debate
Brillouin states that in 1946 at Harvard there was some kind of "what is life—in terms of physics and chemistry—debate", similar to the one held in 1938 at the University of France, themed around the famous 1920 what is life in the context of second law query of Swiss physicist Charles Guye.

“How is it possible to understand life, when the whole world is ruled by the second law of thermodynamics, which points towards death and annihilation?”

Brillouin also states American thermodynamicist Percy Bridgman was at the 1946 Harvard debate, where at, supposedly, during the discussion, he commented how he saw a fundamental difficulty in the possibility of applying the laws of thermodynamics to any system containing living organisms (chnopsological organisms). [2]

Other
Reaction articles to Brillouin’s 1949 “Life, Thermodynamics, and Cybernetics”, include ones by Americans physicist Richard Raymond (1950) and psychologist Mortimer Ostow (1951). [3]

“In an enclosure at constant temperature, the radiation is that of a "blackbody,'' and the demon cannot see the molecules. Hence, he cannot operate the trap door and is unable to violate the second principle. If we introduce a source of light, the demon can see the molecules, but the over‐all balance of entropy is positive. This leads to the consideration of a cycle ‘Negentropy → Information → Negentropy’ for Maxwell's demon as well as for the scientist in his laboratory. Boltzmann's constant k is shown to represent the smallest possible amount of negative entropy required in an observation.”

American social second law historian Eric Zencey asserts that this publication marks the date in which “physics could assert, with sound theoretical justification, that the [second] law held in all cases; until then the law’s negation had to be viewed with a certain theoretic, if not practical, tolerance.” [5] This, however, is a rather blurry if not spurious conjecture; as this type of argument was done originally by Leo Szilard (see: Szilard's demon) in 1922.

Education
Brillouin studied physics at the École Normale Supérieure, Paris, from 1908 to 1912. In 1911, he studied under Jean Perrin until he left for the Ludwig Maximilians University of Munich (LMU), in 1912. At LMU, he studied theoretical physics with Arnold Sommerfeld. Just a few months before Brillouin's arrival at LMU, Max von Laue had conducted his experiment showing X-ray diffraction in a crystal lattice. In 1913, he went back to France to study at the University of Paris. From 1914 until 1919, during World War I, he served in the military. At the conclusion of the war, he returned to the University of Paris to continue his studies with Paul Langevin, and was awarded his Docteur ès science in 1920, with a thesis composed of Langevin, Marie Curie, and Jean Perrin, on the quantum theory of solids, which proposed an equation of state based on the atomic vibrations (phonons) that propagate through it. In 1949, the time of publication of his noted “Life, Thermodynamics, and Cybernetics” article, Brillouin was associated with Cruft Laboratory, Harvard University.

“The entropy content of a living organism is a completely meaningless notion. We have been looking, up to now, for a physicochemical interpretation of life. It may well happen that the discovery of new laws and of some new principles in biology could result in a broad redefinition of our present laws of physics and chemistry, and produce a complete change in point of view.”