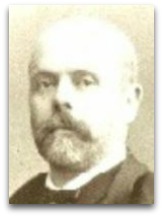 In existographies, Marie-Esprit Leon Walras (1834-1910) (GEcE:#) [CR:69] was a French socioeconomist, one of the founding heads of the Lausanne school of physical economics, noted for his efforts, between 1858 and 1896, in aims at developing a calculus-based science of economics utilizing the notion of economic forces, wherein he came to view people as “economic molecules”. [1]

Overview
In 1874, Walrus, in his Elements of Pure Economics, said the following: [7]

“The words ‘scarce’ and ‘scarcity’ are herein given scientific meaning like the word ‘velocity’ in mechanics and the word ‘heat’ in physics. The mathematician and physicist do not oppose velocity to slowness and heat to coldness as is done in ordinary language. To the mathematician slowness means only less velocity; to the physicist cold means less heat. In the language of science, a body has velocity as soon as it moves at all; it has heat whenever it has any temperature at all. In the same way, scarcity and abundance are not opposed for our purposes. In political economy, however, abundant a thing may be, it is scarce whenever it is useful and limited in quantity, just as in mechanics a body has velocity whenever it travels a given distance within a given time. Does this mean that scarcity is a ratio of utility to quantity, i.e. the utility per unit of quantity, in the same manner that velocity is the ratio of distance passed over to the time taken to pass over it, i.e. the distance travelled per unit time?”

The following quote from the preface of the 1900 fourth edition exemplifies Walras’ view:

“As for those economists who do not know any mathematics, who do not even know what is meant by mathematics and yet have taken the stand that mathematics cannot possibly serve to elucidate economic principles, let them go their way repeating that 'human liberty will never allow itself to be cast into equations' or that 'mathematics ignores frictions which are everything in social science' and other equally forceful and flowery phrases.”

In his work, Walrus developed a generalized economic theory of human equilibriums, based on movements towards satisfaction “states”. [2] Walras was, supposedly, deeply influenced by the works of French mathematical physicist Louis Poinsot, author of the 1806 General Theory of Equilibrium and of movements in Systems, among other works. [8]

In 1909, Walras published “Economics and Mechanics”, one of his last papers, wherein he argued that the psycho-mathematical science of pure economics, as he conceived it, used identical methods as the physico-mathematical sciences of rational and celestial mechanics. [1]

Auguste Walras
Walras’ economic and social views derive from the beliefs of his father, French school administrator and amateur economist Auguste Walras. Auguste became professor of rhetoric at the College of Evreauz in 1831 and that same year published his first book on political economy, The Nature of Riches and the Origin of Value. [6]

In 1858, one evening while the two were out walking, Auguste situated the postulate in Léon that to create a scientific theory of economics one would need to use differential calculus to derive a ‘science of economic forces, analogous to the science of astronomical forces’. [3] Léon soon became convinced that if the equations of differential calculus could capture the motion of the planets and atoms in the universe, then they should also be able to capture the motion of human minds in the economy. [4]

Economic molecules
According to 1981 views of English economist Hazel Henderson: [3]

“[Walras] was an agrarian socialist and wanted to nationalize land, but he talked of humans as ‘economic molecules’ and gave concepts like scarcity scientific definitions analogous to heat in physics.”

Economic equilibrium
On the basis of his father’s direction, Walras conceived the view of people as economic molecules and ‘trades’ of goods in economy as signs that the system was out of equilibrium. As goods are traded in a day, according to Walrus, people move from their initial less satisfied state to a more satisfied (happier) state, a point that Walras called the general equilibrium point. [4] This was the original seed of logic for the later development of equilibrium theories in modern economics.

In the years to follow, Léon Walras developed an interest in both sociology and economics. In 1866, and over the next two years, edited a journal called Le Travail, to which he contributed many valuable sociological articles. In 1870 he was appointed professor of political economy at Lausanne, thus forming the Laussane school. His most important works are his 1877 Elements of Pure Economics, a mathematical treatment of economics, and the 1883 Mathematical Theory of Social Riches. [5]

Students
Two of his notable students, greatly influenced by his ideas, were Polish sociologist Léon Winiarski, who utilized the thermodynamics of German physicist Rudolf Clausius in the teaching of sociology, and French-Italian economist Vilfredo Pareto, who came to view people as human molecules. In 1893, Pareto succeeded Walrus in the chair of economics at the University of Lausanne, Switzerland.