In genius studies, Landau genius scale (LGS), Landau’s ranking (LR), or “Landau physicist genius scale”, is a personal ranking of physics geniuses, e.g. greatest physicists ever (of the 20th century predominately), maintained by Russian physicist Lev Landau (1908-1968), assembled in circa 1930s, and modified over the years, which he supposedly kept in his coat pocket; amid which he ranked himself, considering thinkers below him to be "fools", and those above him to be "superior intellects", and those comparable to him, e.g. Wolfgang Pauli, supposedly, to make him angry if they were skeptical of his views and or theories.

Votes
The following is a photo of of Lev Landau with his teacher Niels Bohr visiting the physics department of Moscow State University, 1961, with Landau’s genius scale #s shown: 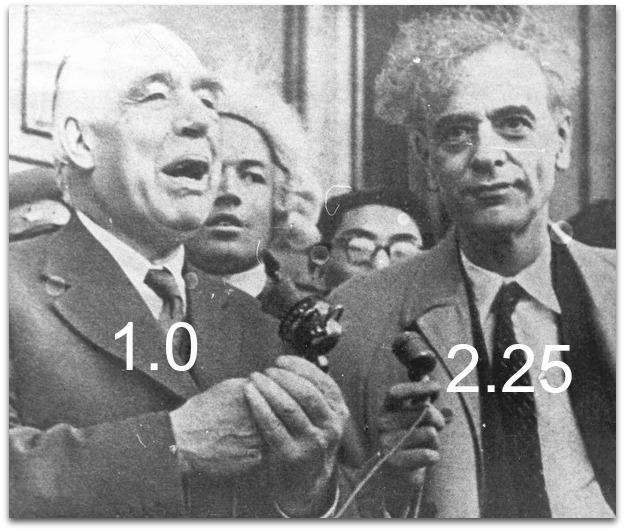 A few recent votes include:

Logarithmic | Scale
Landau’s scale, according to Vitaly Ginzburg (2004), was a logarithmic scale, from 0 to 5, according to which a physicist in the first class had ten times the impact of someone in the second class, and so on. [7]

Feynman
Landau, at one point, according to Russian physicist Vitaly Ginzburg (2004), ranked Richard Feynman in the 1 category. [8]

Pauli | Anecdote
Lev Landau, according to David Kahana (2015), was well-known to be utterly merciless with colleagues that he considered to be lesser intellects than himself. The only person, according to Kahana, who easily matched him in arrogance was Wolfgang Pauli. The following is the story, quite possibly apocryphal, as reported by Lubos Motl (2008), of what is supposed to have happened when Pauli met Landau: [10]

“Landau who treated everyone else as a fool found his match in Pauli. After explaining his work to a skeptical Pauli, he angrily asked whether Pauli thought that his ideas were nonsense. ‘Not at all, not at all,’ came the reply. ‘Your ideas are so confused I cannot tell whether they are nonsense or not’.”

In 1974, Landau's close associate Russian Evgeny Lifsĥitz, in a talk at the Abdus Salam International Centre for Theoretical Physics (ICTP) in Trieste, Italy, mentioned Landau's genius scale; an account of which is given by Indian physicist Asoke Mitra (2006) as follows: [1]

“Landau’s classification of outstanding genius physicist, as narrated by his close associate Evgen Lifsĥitz, at a talk given in 1974 at the Abdus Salam International Centre for Theoretical Physics (ICTP) in Trieste, Italy. According to Landau’s classification, Isaac Newton received the highest rank, 0, followed by Albert Einstein at a rank of 0.5, then by Niels Bohr, Werner Heisenberg, Erwin Schrodinger, Paul Dirac, Satyendra Bose, Eugene Wigner, and a few others at 1, and so on. Landau had given himself a modest rank of 2.5. The classification continued to the rank of 5 for mundane physicists.”

A 2008 rendition of Landau rankings by Czech theoretical physicist Lubos Motl, is shown below: [9]

“Landau was always walking around with a ranking of the best physicists in history recorded in his notebook. He scored them on a logarithmic scale of 0 to 5. Newton was rated the best. Einstein was next and, of course, Bohr. After them came Heisenberg, Dirac, Schrödinger, Bose and Wigner.”

Landau, according to both of these accounts, ranks Newton first. Pitaevskii, to note, seems to places Dirac at 5th place and Schrodinger at 6th, contrary to Lifsĥitz who puts Schrodinger at 5th and Dirac at 6th.

Miss-attributions | Incorrectly cited rankings
A contradictory account of Landau’s ranking, wherein Einstein, supposedly, is ranked first, with a score of ½, above that of Newton, who is said to be assigned with a score of 1, is found Anna Livanova’s 1980 biography of Landau, entitled Landau: a Great Physicist and Teacher. [2]

In 1981, American physicist David Mermin published a review of this book, for Physics Today, entitled “One of the Great Physicists … and Great Characters”, wherein he cites the Landau scale, as follows: [3]

“Landau’s classification of physicists on a scale of 1 to 5, Einstein rating ½, Bohr and the other founding fathers 1, Landau himself 2½ (but promoted later in life to 2), and the 5s ‘pathologists’.”

“Let me first modify my title [“My Life with Landau”]. There is a short biography of Landau by Anna Livanova. There she describes his classification of physicists on a logarithmic scale from 1 to 5. Einstein has a special rank, ½, Bohr, Schrodinger, Heisenberg, and a few others were 1s. Landau, originally a 2½, later promoted himself to a 2. Members of class 5 were called ‘pathologists’. When I reviewed this book for Physics Today the editor asked for a short biographical blurb. Just say, I replied, that I’ve worked in fields of interest to Landau in hope of getting out of class 5. So, in Jun 1981 Physics Today, you can read at the bottom of page 61, “N.D. Mermin is a professor of physics at Cornell University. Struggling to qualify as a 4½, he has made occasional contributions to the theory of phase transitions and liquid helium.”

In 1997, citing Mermin, Einstein biographers Anthony Hey and Patrick Walters refer to the scale as follows: [5]

“Landau used to keep a list of names, in which he graded physicists into ‘leagues’. The first division contained the names of physicists such as Niels Bohr, Werner Heisenberg and Erwin Schrodinger, the founding fathers of quantum physics, as well as historical ‘giants’ such as Isaac Newton. He was rather modest about his own classification, grading himself 2½, although he later promoted himself to a 2. Landau [also] created a ‘superleague’ containing only one physicist, Einstein, whom he uniquely classified as a ½.”

The list of publications that mis-attribute, per Livanova-Mermin, Landau equating Newton, BELOW that in intelligence of Einstein, and on part or EQUAL in intellect with the likes of “Bohr, Heisenberg, and Schrodinger” [10] or “Satyendra Bose and Eugene Wigner” [6], and so on, seems to be endless.

Later years
Landau, in his later years, according to Vitaly Ginzburg (2004), mentioned his “classification” less often as the years passed, supposedly, taking a more sober view of classifying people.

“Of all the physicists I have known personally, nobody resembled Landau more than Feynman. This resemblance extends to many things, scientific style, aspects of their personality and behavior, and interest in pedagogical ideas.”

“Lev Landau was a genius and I propose to upgrade him from 2 to 1.5 if not 1 on the Landau scale.”