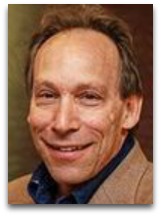 In hmolscience, Lawrence Krauss (1954-) (CR:5) is an American physicist and atheism advocate — a frequenter of Atheism Reviews debates— noted for his 2012 book A Universe from Nothing, wherein he contends to solve the Gottfried Leibniz’ circa 1700 posit “why is there something rather than nothing?”, the last of the so-called “theologian trump cards”, according to Richard Dawkins, via recourse to quantum vacuums. [1]

Overview
In 2001, Krauss published Atom: an Odyssey from the Big Bang to Life and Earth … and Beyond.

In 2005, Krauss, on PBS, dialogued, via video feed, with Michael Behe on the statement by the president that “both sides” should be taught, on the subject of intelligent design and evolution. (Ѻ)

In circa 2005, Krauss, during a talk, stated the following:

“Here’s a beautiful picture [below] from the Hubble Space Telescope of a distant galaxy, far far away and long long ago. It’s about a billion light-years away. We’re looking at it as it looked a billion years ago. So many of those stars no longer exist.

Here’s an object that’s just as bright as the center of the galaxy. You would think it’s a start that’s close to our galaxy that just got caught in the picture. It’s not. It’s a star on the edge of that galaxy that has exploded. Exploding stars shine with a brightness of 10 billion stars. They’re the brightest fireworks in the universe. [They’re called] supernovas. They’re remarkable. This is something that I wrote a whole book about. Someone asked yesterday why I wrote that book. [The answer is] that it is the most poetic thing that I know about the universe.

Richard Dawkins wrote a great book called Our Ancestor’s Tale: a Pilgrimage to the Dawn of Life (2004) (Ѻ), and I wrote a book about a different ancestor’s tale, it’s called Atom: an Odyssey from the Big Bang to Life and Earth … and Beyond (2001) (Ѻ).

It really is the most poetic thing that I know about physics. You are all stardust. You couldn’t be here if stars hadn’t exploded, because the elements: the carbon, the nitrogen, the oxygen, the iron, all the things that matter for evolution weren’t created at the beginning of time, they were created in the nuclear furnaces of stars, and the only way they can get into your body, is if the stars were kind enough to explode. So forget Jesus, the stars died so that you could be here today!”

This, according to GoodReads (Ѻ) like rankings, is his most-popular quote. The “humans as stardust” model, as was popularized by Carl Sagan in 1980, seems to have originated via Hilda Finnemore’s 1924 book A History of the Earth from Star-Dust to Man. [2]

In 2012, Krauss, in his A Universe from Nothing: Why There is Something Rather Than Nothing, of note, mentions stardust twice, as shown below, but does not mention Jesus.

“We are all, literally, star children, and our bodies made of stardust. Quantum fluctuations, which otherwise would have been completely invisible, get frozen by inflation and emerge afterward as density fluctuations that produce every-thing we can see. If we are all stardust, as I have written, it is also true, if inflation happened, that we all, literally, emerged from quantum no-thing-ness.”

Every "thing" came from no "thing", according to Krauss?

Religion | Atheism
Krauss was brought up in a Jewish household, was bar mitzvahed, and read the Bible and the Quran as a kid, and says (2016) that he “wanted to believe” in god, like he wanted to believe in Santa Claus, but that as he got older, it became apparent that those were just myths and superstitions. (Ѻ)

Quotes | On
The following are Krauss related quotes:

“The belief that all of reality can be fully comprehended in terms of physics and the equations of physics is a fantasy.”

Quotes | By
The following are noted Krauss quotes:

“Commitment to open questioning is deeply tied to the fact that science is an atheistic enterprise. “My practice as a scientist is atheistic,” the biologist John Haldane wrote, in 1934. “That is to say, when I set up an experiment I assume that no god, angel, or devil is going to interfere with its course and this assumption has been justified by such success as I have achieved in my professional career.” It’s ironic, really, that so many people are fixated on the relationship between science and religion: basically, there isn’t one. In my more than thirty years as a practicing physicist, I have never heard the word “god” mentioned in a scientific meeting [compare: Joshua Greene]. Belief or nonbelief in god is irrelevant to our understanding of the workings of nature—just as it’s irrelevant to the question of whether or not citizens are obligated to follow the law.”

“We are here by ‘chance’, absolutely, as far as we can tell, and we should be thrilled by that fact. First of all, there is NO evidence of any ‘design’ or ‘purpose’ that we can see in any case. Secondly, in my last book, The Universe From Nothing, I explain how the entire universe can be created from nothing, without any supernatural shenanigans, and so even our entire universe could be here by ‘chance’. Once you’re in our universe, what this [new] book is about is the remarkable fact that even the laws of physics we see today are somewhat accidental, so the universe wasn’t even designed for life. The fundamental laws of physics don’t even allow life at all, and we’re here just by ‘accident’, like an icicle on a window and we should celebrate that fact. The fact that we’re here as a ‘cosmic accident’ means, in some sense, that ‘life’ is more precious and we should enjoy our brief moment in the sun.”