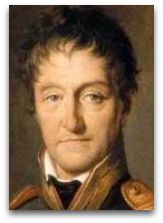 In existographies, Lazare Carnot (1753-1823) (IQ:175|#222) (Eells 100:58) (CR:36) was a French engineer, mathematician, and politician, father of thermodynamics founder Sadi Carnot (and his brother Hippolyte Carnot), who in 1794, working in coordination with French mathematician Gaspard Monge, founded École Polytechnique the hotbed of science in the early 19th century. Beginning in 1784, Lazare published several books on the geometric physics of machines, in general, those such as screw presses, pulleys, water wheels, wind mills, electromagnetic devices, in which he set out to show that in all variations of machines there existed fundamental principles of operation and limits to operation owing to the geometry of movement of the parts and the laws of force. This universal machine theory set forth a framework of logic with which Sadi Carnot would later tackle the general laws of the operation of heat engines, in 1824.

Overview
Lazare was born in Nolay (Gold Coast), Côte-d'Or, and first was educated in Burgundy at the Collège d’Autun, an artillery and engineering prep school. In 1771, he entered the Mezieres School of Engineering, where he had met and studied with the likes of Benjamin Franklin (IQCB=173), at the age of twenty and obtained commission as a lieutenant in the Prince of Condé’s engineer corps. It was here that he early made a name for himself both in the line of physics and in his work in the field of fortifications. Although in the army, he continued his study of mathematics.

In 1784, Lazare published his first work Essay on Machines (Essai sur les machines en général) which contained a statement that foreshadowed the principle of energy as applied to a falling weight. In 1797, he published Reflections on the metaphysics of infinitesimal calculus (Réflexions sur la métaphysique du calcul infinitesimal); a title that likely later served as a model for Sadi’s Reflections on the Motive Power of Fire, the founding paper of thermodynamics, written in 1824.

At the turn of the century, he had published three scientific books The correlation figures of geometry (De la correlation des figures de geometrie) (1801), Geometrie de position (Geometrie de position) (1803), and a mathematical work entitled Fundamental Principles of Equilibrium and Movement (Principes fondamentaux del' equilibre et du mouvement) (1803), a discussion on the efficiency of olden machines, such as pulleys and inclined planes, all of which were translated into German. [3]

Lazare used German polymath Gottfried Leibniz's calculus (over that of Newton’s) and also made fine use of Leibniz's ideas about mechanical energy conservation. He pointed out, for instance, that an imaginary perfect waterwheel, none of the water's energy would go to waste. None would be dissipated, and all the motion would be completely reversible. If the perfect waterwheel were run backward, it would become the perfect pump. [2]

Magdeburg steam engine
In 1816, following Napoleon’s final defeat at Waterloo, Lazare, the only general of Napoleon’s army to never be defeated, went into exile in the German city of Magdeburg, where he occupied himself with science. [3] Lazare’s interest soon turned to steam engines, with the first steam engine coming to Magdeburg in 1818. [1] Sadi soon visited him in Magdeburg in 1821 and it likely that Lazare influenced his son with his thoughts on the universal principle of heat engines in general; for, within three years, in 1824, Sadi Carnot would publish his masterpiece on the thermodynamics of steam engines.